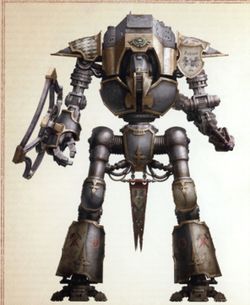 Knight Lancers are a type of specialized Cerastus Patttern Knight walker of the Imperium.

One of the more uncommon but highly valued Knights fielded by Knight Houses, the Knight Lancer is a first-strike weapon, attuned to rapid assault tactics and lethal flanking maneuvers. It is renowned for its speed and power, as well as for the temperamental and restive nature of its machine-spirit. Knight Lancers are well-equipped for close combat, possessing both a Cerastus Shock Lance and a Ion Gauntlet Shield.[1]

Because of this reputation, the most impetuous and glory-hungry of the Knight households are driven to bond with these war machines, their own souls a match for the fury caged within their war engines.[1]