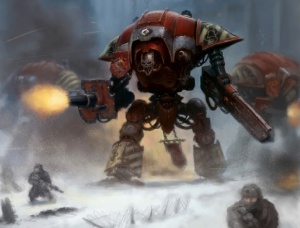 Knight Paladins are the most common model of Imperial Knight walkers.

Standing nine meters tall,[1] the Knight Paladin represents a perfect balance of speed, firepower and armour, allowing it to undertake a wide variety of roles in battle. Nobles who have the honour of piloting a Knight Paladin take great pride in their ability to carry out a variety of tasks on the battlefield.[2][3]

The Knight Paladin's all-terrain capability means it can move more quickly through terrain which would be hazardous to traditional vehicles and reposition itself to engage the enemy as needed. Its primary weapon, the long-ranged rapid-fire Battle Cannon, gives it the capacity to engage a variety of targets and provide fire support for friendly forces when needed. However, while a Paladin is excellent in this role, it is equally suited to close assault thanks to its giant Reaper Chainsword. This weapon is not only effective at destroying large vehicles but also slaying monsters such as those fielded by the Tyranids. Some Knights have been known to replace the chainsword with a Thunderstrike Gauntlet.[2][3]

For protection from enemy fire, the Knight Paladin can rely on its Ion Shield to deflect and slow enemy shots. Additional secondary weapons on the Knight Paladin include two Heavy Stubbers, one co-axially mounted with the Battle Cannon and the other in a swivel mount on its left chest. For some Knights, one of these stubbers is replaced with a Meltagun. Finally, Knight Paladins have been known to carry an Ironstorm Missile Pod, twin Icarus Autocannons, or a Stormspear Rocket Pod on their carapace mount.[3] 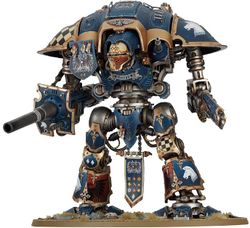