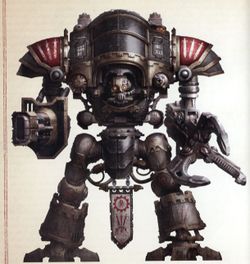 The Questoris Knight Styrix is a class of Imperial Questoris Pattern Knight.

The Styrix was produced with equal sophsitication to the Knight Magaera. However it has been meticulously designed to facilitate the efficient eradication of infantry and support vehicles.[2] Thus the Styrix was armed with a Volkite Chieorovile and backed up with a graviton gun and twin-linked rad cleanser, the Knight Styrix is easily able to eliminate large numbers of infantry at range. Whilst in close combat, its powerful Hekaton Siege Claw can smash vehicles and tear buildings asunder.[1]

Housing machine spirits which some say became too accustomed to slaughter during the Age of Strife and the Great Crusade that followed it, many conservative Knight Houses consider the Styrix to be a malevolent pattern, the wanton destruction it unleashes being beneath a true Knight. Other Households hold no such reservations, loosing entire formations of Styrix Knights to annihilate their foes.[1]

The Styrix held great esteem to Households sworn to the Mechanicum, especially among those scions who have undergone extensive augmentation. These pilots share their machine spirit's disdain for weakness of flesh. The Knights of House Col'Khak in particular are renowned for fielding entire formations of these machines in support of the Legio Atarus.[2a]