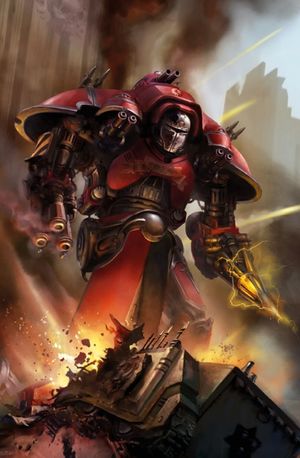 The Knight Valiant is a Dominus-class Imperial Knight, that excels at destroying its enemies at close-range.[1]

The Knight Valiant defeats its enemies through the simple principle of applying overwhelming firepower at close proximity. Marching relentlessly into the fight, the Valiant unleashes such devastating punishment against its targets in so short a space of time that they can neither fight back nor endure. Even a single Knight Valiant can break the back of an onrushing enemy horde, or shatter the centre of the foe’s battle line like a battering ram smashing through a castle gate. When an entire squad of these fearsome war engines strides into battle, they can easily rip apart an enemy army.[3c]

For armament, the Knight Valiant is equipped with a Thundercoil Harpoon and Conflagration Cannon as well as carapace-mounted Shieldbreaker Missiles and Siegebreaker Cannons and two twin-Meltaguns.[2] 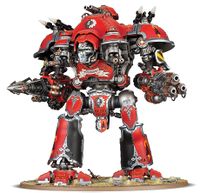