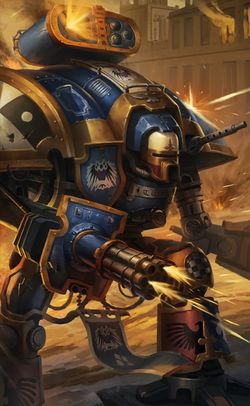 The Knight Warden is a class of Imperial Knight.

An imposingly tall, heavily armed engine of war, nothing announces its presence on the battlefield quite like an Imperial Knight. Carrying itself into the thick of the action with heavy, thudding steps, and protected by both thick adamantine armour and an Ion Shield, the Knight Warden is perfectly equipped to deal with foes who attempt to use weight of numbers to their advantage. The Knight Warden can unleash a furious hellstorm of large-calibre shells from its Avenger Gatling Cannon — the weapon's distinctive drone sounding a terrible clarion call - which can tear apart even the most impressively-armoured foe. Mounted co-axially with the cannon is a Heavy Flamer to flush the enemy out of cover. Should any enemy be brave - or foolish - enough to engage a Warden at close quarters, they’ll find themselves at the mercy of some of the Imperium’s most fearsome close-combat weaponry, either a Reaper Chainsword or Thunderstrike Gauntlet. A Heavy Stubber mounted on a ball turret provides additional firepower for mowing down groups of infantry.[1][2]

While the primary ranged weapon of the Knight Warden is its Avenger Gatling Cannon, some will mount additional weapons. These include an Ironstorm Missile Pod, twin Icarus Autocannons, or a Stormspear Rocket Pod mounted on top of their carapace. Some will also replace the chest-mounted heavy stubber with a Meltagun for added close-range, thermal-based firepower.[1][2] 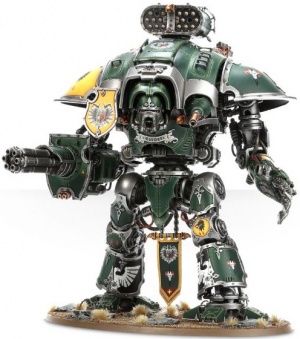