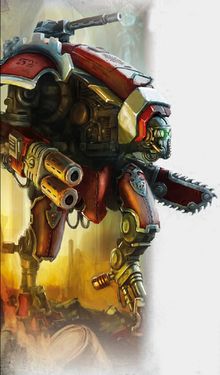 The Knight Warglaive is a Armiger-class Imperial Knight that acts as fast-moving, close-ranged fire support for larger Knights.[1b]

Nimble and responsive, Armiger Warglaives leap towards the enemy with powerful strides. On one arm they wield fearsome Reaper Chainsword. On the other arm they bear menacing Thermal Spears, bulky melta weapons that are essentially stripped down equivalents of the Knight Errant's thermal cannon. A single shot from such a weapon can vaporise even the most heavily protected combatant, melt through the wall of a bunker or reduce a battle tank to a molten wreck. Atop their carapace, each Warglaive also carries a heavy stubber for reaping infantry, or else a meltagun that augments their already fearsome anti-armor capabilities.[1b]

Though they are the lightest class of Imperial Knight regularly deployed, each Armiger is still an imposing war engine capable of destroying entire squads. They possess exceptional speed, able to outpace most battle tanks and transport vehicles when moving at a sprint and react almost as quickly as an organic warrior. Moreover, to compensate for their comparatively smaller size, Armiger-class Knights typically hunt in packs of two or three. In the case of Warglaives, this involves rapidly outflanking and encircling their quarry like wolves on the prowl, before closing in on a rune-transmitted signal to trap and slaughter the enemy. Unusually for Knights, Armigers are not fitted with a full Throne Mechanicum. Instead they are controlled using a more compact device known as a Helm Mechanicum, which is significantly less prestigious than a standard Imperial Knight. This is compounded by the fact that, while Armigers can operate independently, it is traditional for their Helms Mechanicum to be neurally slaved to the command impulses of a larger Knight, rendering them subordinate. To accept such mental serfdom is to possess the rank of Bondsman, and while this is certainly no mark of dishonour, it is far from glorious.[1b]

It is for these reasons that the piloting of Armigers falls to those from the lower social strata of the Noble houses. Some give this duty to distant relatives and minor offshoots of more established bloodlines, or the surviving Knights of a house that has fallen upon hard times. Others elevate the finest common-born warriors from amongst their household guard or planetary militia forces, raising their families' standing from mere peasantry to valued and respected meritocracy. Still other Noble houses maintain specialist sub-orders of favoured retainers who are fated from birth to be Armiger pilots. Such is the case with House Griffith's Order of the Hound, who are inculcated with notions of faithful service and honourable submission to a Noble's will. These warriors are expert Armiger pilots who favour the close-quarters aggression of the Warglaive, and who stride into battle alongside their masters filled with dogged determination to do their betters proud.[1b]