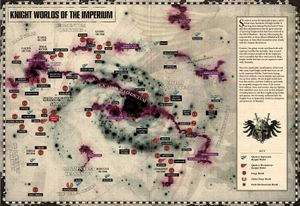 Knight Worlds across the Galaxy

Knight worlds were founded during the ascendency of mankind in the Dark Age of Technology, when humanity first began to spread out from Terra and the Sol System. The initial impetus to settle these worlds was based on the burgeoning race's need for raw materials, be it fertile worlds for agriculture or mineral-rich worlds for mining.[1a]

The Long March fleets despatched from Terra contained massive colony ships each filled with thousands of settlers; these ships would then be deconstructed upon landing to provide the initial materials for settlement. In addition to the colony ships, the fleets included advanced Knight suits and their pilots. These Knights were often the difference between a colony thriving or foundering, and their pilots commanded enough power to be considered their worlds' de facto rulers.[1b]

During the Age of Strife, these worlds were cut off from the rest of the realm of man by warp storms, but were often well-placed to avoid the conflict of that age due to their martial traditions and conservative outlook. During this long isolation, the Knight worlds tended towards feudalism, with a hierarchy of nobility controlling both the Knight suits and the worlds themselves.[1c]

The Knight worlds were welcomed back into the Imperium during the Great Crusade, after the rogue trader Jeffers rediscovered Chrysis within the Segmentum Solar. Since then, both the High Lords of Terra and the Adeptus Mechanicus have come to court the power and technology present on these worlds, and the allegiance of subsequently re-claimed Knight worlds has been split between Terra and Mars.[1d]

Some Knight Worlds, such as those belonging to House Taranis, will submit a tribute of its citizens to be converted into Mechanicum Skitarii Overseers. These "raw materials", often of excellent genetic stock, are referred to as Psychosis-Neuracanium.[2]