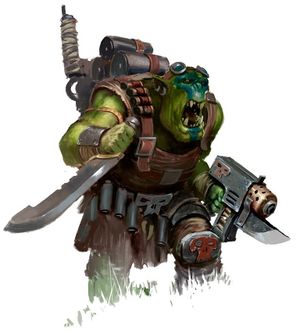 Kommandos are Orks fond of sneaky type of warfare, experts in laying ambushes and unsuspected attacks.

Ork Kommandos epitomize the Orky virtue of low cunning. Nothing makes a Kommando happier than creeping up on an unsuspecting enemy, his mates slithering through the undergrowth at his side. When the time is right, the Kommandos will burst from their concealment, slashing, stabbing and shooting their stunned prey before they have a chance to strike back.[1]

Kommandos are viewed with suspicion by the majority of Ork Boyz, on the rare occasions they are viewed at all. These small-unit specialists do not socialize with the other Orks, and sometimes exile themselves from the tribe for months at a time, even permanently divorcing themselves from their warband in more extreme cases. The Kommandos prize intelligence and initiative, and some of them are even able to read. Not for them the thrill of a massed charge or a turbo-powered race to the front line in a badly-made trukk. Instead a Kommando gets his kicks from slitting throats and spreading panic behind enemy lines before launching a perfectly timed ambush. The horrified look on the faces of their prey, who assumed they would be able to see the Ork attack a mile off, is tremendously rewarding to the members of a Kommando mob. These scare tactics are epitomized by Snikrot of the Red Skull Kommandos, whose name is a byword for terror upon Armageddon.[1b]

Likewise, the Imperium, on first being told of these "specialist" orks, was disbelieving, taking it as dogma that Orks are completely incapable of such subtlety, and that none of that species could ever enter combat except in a large mob, with ostentatious armament and bellowing noise.[1a]

It is common for each Kommando to have a specialist role within the mob, and have a nickname appropriate to his role, such as ‘Fireboy’ or ‘Throatslit.’ Their organized and militaristic outlook means that young Stormboyz often develop into the Kommandos instead of rejoining the right-thinking Ork boyz at the heart of each warband. Kommandos are most often found among members of the Blood Axes Clan who also prize planning and kunning plans above headlong charges.[1]

Kommandos are usually looked down upon by most of the orkish society, believing that "all dat sneaky round stuff just aint what da orks do". But no warboss in his right mind would refuse their services. Kommandos put on camouflage and hide around in cover, using stealth, espionage, guerrilla warfare, and other methods of stealth combat to kill their foes. On the field of battle, Kommandos will assassinate enemy sentries and destroy gun emplacements to give the rest of the ladz a better chance of reaching the enemy lines unscathed thus playing important role in any warband.[1]

The tools of the Kommando’s trade are subtle by Ork standards. They place great faith in soot-blackened blades and camouflage-style warpaint, painting their skin with stripes of blood, dirt and dung so that they blend in with their surroundings. This practice is shocking to a normal Ork, who considers the idea of covering up his greenness unnatural. Only the Blood Axe clan truly sees the value of such a caution. Some Kommandos are even more inventive with their camouflage, attaching foliage to their uniforms or even employing cunnin’ disguises (Cunning by Orky standards, anyways). Kommandos also make use of specialised weaponry that depends on their style of combat. Common Kommandos equip themselves with Sluggas, Choppas and Stikkbombs, while some Boys in the unit may have Big Shootas, Burnas or Rokkit Launchas, revealed only when they are in a position to cripple a command tank or slaughter an enemy unit that has broken cover.[1]