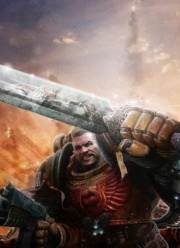 Koorland, known by his wall-name Slaughter, was a Captain and later Chapter Master of the Imperial Fists who proved instrumental to the Imperium's survival in the War of the Beast in mid-M32. During the conflict he eventually rose to become Lord Commander of the Imperium.[5]

At the start of the War of the Beast, Koorland was Second Captain (Captain of Second Company) of the Imperial Fists Daylight Wall Company.[1a] On the world of Ardamantua, Slaughter led Imperial Fists alongside Chapter Master Cassus Mirhen against the Xenos Chromes. Upon the arrival of the Orks and their Battle Moon, Koorland and his comrades were seemingly overrun in the opening shots of the War of the Beast.[1b] However, he later was saved thanks to the efforts of the Tech-Priest Phaeton Laurentis, and recovered and healed by the Magos Biologis Eldon Urquidex. Koorland appears to be the only survivor of the Chapter.[2] 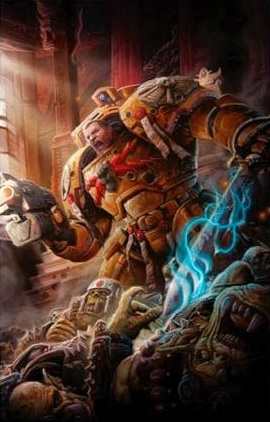 Koorland, Lord Commander of the Imperium

Refusing to return to Terra, Koorland instead enacted the "Last Wall" Protocol, which would see all Imperial Fist Successor Chapters rendezvous in the Phall System (site of the famous Horus Heresy battle) and reunify into a Legion once more on the condition that Terra itself was under dire threat. As the last surviving known Imperial Fist, Koorland traveled to the Phall System alongside Laurentis without Imperial authorization and represented his Chapter at the meeting between the Fists, Black Templars, Crimson Fists, Fists Exemplar, and Excoriators.[3] Later Koorland helped lead the attack by the combined forces of the "Last Wall" against the Ork Moon over Terra, but was scolded afterwards for his unsanctioned actions by Lord Commander Udin Macht Udo. Despite the urges to disregard the wishes of the Senatorum Imperialis by the more militant of his brothers such as Maximus Thane and High Marshal Bohemond, Koorland urged that it was the Emperor's will that the Astartes follow the orders of the Adeptus Terra.[4]

However, it eventually became clear to Koorland and his allies that the High Lords were too ineffectual for victory to be achieved. After Lord Commander Udo passed a motion to ban the Inquisition from the Senatorum, Koorland led a political coup in cooperation with Drakan Vangorich, Wienand, Veritus, and Vernor Zeck. After a heated argument and sensing the writing on the wall, every other High Lord came to support Koorland's actions and the Chapter Master was named the new Lord Commander of the Imperium.[5] Koorland's first act as Lord Commander was to send out a call across the Imperium, urging forces converge on Terra for an offensive aimed at The Beast's newly revealed homeworld of Ullanor.[6]

Koorland, however, received perhaps even more important news from Inquisitor Lord Veritus, the Primarch Vulkan had been spotted battling the Orks on the world of Caldera. Koorland immediately led a taskforce from Terra to Vulkan, managing to recruit him to lead the Imperial attack on Ullanor after helping the Primarch save Caldera. Vulkan expressed great respect for Koorland, stating that he lived up to the name of Rogal Dorn.[6]

With Vulkan largely isolating himself, Koorland acted as the primary Imperial commander during the final Imperial gambit of the war, the invasion of The Beast's homeworld of Ullanor. During the campaign, Vulkan expressed his faith in Koorland and asked he do the same with himself. He experienced some insubordination over his adherence to the unclear wishes of Vulkan, most so from Black Templars High Marshal Bohemond. After a challenge to his power as Lord Commander by the High Marshal, Vulkan stated that whoever could lift his hammer Doomtremor and destroy a gate blocking them would be given the position. Bohemond and Crimson Fists Chapter Master Quesadra both proved unable to lift the Hammer, while Koorland joined with Thane and his squad to lift it together. Once lifted, they charged the gate and launched it like a javelin, and the mighty hammer blew apart the entrance. Vulkan maintained that Koorland's willingness to work with others, not as an individually great warrior, was why Koorland was best suited for Lord Commander.[7a]

Koorland accompanied Vulkan during the strike inside The Beast's palace in Ullanor's capital of Gorkogrod, but realizing the Primarch intended to fight the massive Warboss alone ordered a withdrawal from the complex. Though Koorland was dismayed over the decision, Vulkan ultimately fulfilled his own wish to sacrifice himself to slay The Beast.[7b] After Vulkan seemingly failed to slay The Beast on Ullanor, Koorland went ahead with the creation of the Deathwatch despite the reluctance of the High Lords of Terra. The Deathwatch was successful in destroying the Ork Attack Moon over Terra, and after following a lead by Veritus to Nadiries he led an expedition that recovered the last remnant of the Sisters of Silence.[8]

After recovering the Sisters, Koorland returned to Terra and continued to clash with the High Lords, who he began to treat more and more harshly. The tensions with the High Lord came to their head when Koorland executed the unhinged Ecclesiarch Mesring after he his allegiance to The Beast. In the aftermath of the incident, Koorland declared the return of the Imperial Truth and that the Ecclesiarchy's privileges were to be revoked, including the loss of its representation in the Senatorum Imperialis. Crisis and fear kept the other High Lords in line.[9]

After the disaster with the High Lords, Koorland moved on with his plan to slay the Beast. He planned to use a captured Ork Psyker in conjunction with the Sisters of Silence Pariah effect to create a "reverse-Waaagh!" to decimate the Greenskin hordes. The plan succeeded in the Second invasion of Ullanor, but after leading an assassination team that barely slew the Beast a larger even more vicious Ork appeared. Stunned, Koorland realized that there were in fact six "Prime-Orks", each a Beast in its own right. Shortly after, Koorland was killed by this creature and supposedly the last of the Imperial Fists died with him.[9]

In the aftermath of the death of Koorland, his close confidant Maximus Thane decided to rebuild the Imperial Fists by having each chapter of the Last Wall contribute a portion of its own forces. Thane succeeded Koorland as the new Chapter Master of the Fists.[10]

In battle, Slaughter fought with a two-handed Power Sword that had seen service during the Siege of Terra in the hands of Emetris.[1c]