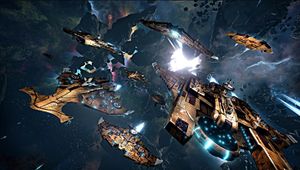 The Tau Fleet (known as Kor'vattra in the Tau language) is responsible for the defense of the Tau Empire and their stellar expansion plans. Tau vessels are operated by the Air Caste. [1]

The Tau also operate a mercantile armada known as the Tau Merchant Fleet.

The Tau Empire has only expanded into space during the last millennium. Despite this they have made remarkable progress in developing both civilian and military starships, and have now reached a level where their ships can be compared to Imperial designs. The development of the Tau fleet has been given the highest priority by the Ethereal Caste. By M39 they had spread through the T'au system and ringed their homeworld with orbital research and manufacturing facilities. Further expansion required a drive system capable of spanning interstellar distances, however, and this proved to be a formidable barrier.[Needs Citation]

Tau vessels were already equipped with a form of gravitic drive. This system projected a sheath of gravitic energy ahead of and around the vessel which was continually re-projected further ahead, drawing the ship behind it rather like an archaic sail. For two hundred tau'cyr, the Earth Caste grappled with the problem, only for the breakthrough to be handed to them. On the innermost of T'au Seven's moons, a routine geological survey discovered the remains of an alien vessel. The significance of the find did not disrupt Tau society as much as might have been expected. Tau theorists had long reasoned that other life forms existed and the verification helped confirm the belief that there was a greater destiny awaiting them. It seems that no Tau commented on the sheer good fortune of finding the technology that they so desperately needed on their doorstep just when they needed it.[Needs Citation]

The Tau were able to replicate the warp drive of the alien vessel but the initial test flights were a disaster. Achieving transition to the Warp required more than technology, it required psychically attuned minds and the Tau race boasted no psykers. Without them to guide the transition, no amount of power could breach the dimensional barriers.[Needs Citation]

The best the Tau could do was make a partial transition, forcing themselves into the void that separated Warp space and real space before they were hurled out again, like a ball held under water then released. Data gathered at great cost during the test flights was studied closely. The Earth Caste scientists made the observation that the boundary between real space and warp space was not a neat line. It was closer to being a turbulent ocean fomented by the tempestuous warp tides below. By carefully angling their descent toward the Warp and extending the field generated by the gravitic drive into a wing, shaped to hold the vessel down, a Tau vessel could extend the duration of the "dive" considerably. The speeds achieved in the ascent back to real space were staggering and this, coupled with the effect of the Warp on time and space, ensured that the real distance covered by the dive was immense. Early tests lost several drone ships because they inadvertently passed far beyond the sensor range of their recovery vessels. The details were soon resolved.[Needs Citation]

There was still a major constraint: only the most powerful (and bulky) drives could sustain the gravitic wing throughout the dive and the power drain meant that considerable recharge time was needed between dives. Also, by comparison to actually navigating the warp, the pace was still very slow. Compared to typical Imperial Warp speeds the Tau drive was slower by a factor of five. The speed was consistent though, did not expose the Tau to the perils of the Warp and enabled the Tau to expand beyond their home star for the first time.[Needs Citation]

The first major class of Starships built were the ponderous Gal'leath (Explorer) class vessels. These vessels laid the foundations for the Tau Empire and formed the basis of the Kor'vattra for its first wars with the Orks and the Nicassar. The Nicassar were less advanced than the Tau and after their speedy defeat were one of the first other races absorbed into the Empire. The Orks, however, posed a major problem: Ork ships were faster, better shielded and more heavily armed. The Gal'leath class was simply too expensive a resource to risk against such a dangerous adversary. Fortunately new, more compact gravitic drives led to the introduction of the smaller Il'fannor (Merchant) class and, to counter the numerous Ork escorts, the Tau developed their own Kass'l (Orca) gunships. The Tau were slow to build a gravitic drive with sufficient power for Warp drives small enough to create an independent escort, so the Kass'l would travel inside a larger vessel's gravitic sheath over long distances, disengaging when back in normal space. This, combined with the introduction of super-heavy Ion cannons and Barracuda fighters, helped restore the balance - but it was the power and efficiency of the Tau shipyards that prevented the Empire from being devastated.[Needs Citation]

Naval engagements with the Imperial Navy during the Damocles Crusade were unfavorable to the Tau, particularly the losses they sustained in their first battle in the Tau-claimed Hydass System. Additional losses against tendrils of Hive Fleet Behemoth immediately afterward demonstrated to the Tau that despite the Kor'vattra's valor, it was out-gunned, out-maneuvered, and required better hardware and reevaluation of its doctrines.[3]

With the full blessing of the Ethereal Caste, Tau High Command began a bold fleet expansion and development program. Entitled Kor'or'vesh that would see new ship designs, built with the newest of Tau technology, and informed by the costly losses they had already sustained. The program was given the highest priority, applying the best of the Earth Caste engineers to the project and sparing no expense in resources. The result were several new classes of Tau ships, beginning with the Il'Porrui Class Cruiser which served as a test bed for many of these new design philosophies, and continuing to include the Kir'shasvre escort, and the mighty Or'es El'leath Class Battleship and its Kir'la Carrier Escorts. While individual craft from this program were encountered by Imperial forces prior, the Taros Campaign was the first time multiple examples of these new generation Tau ships would see battle against the Imperium.[2]