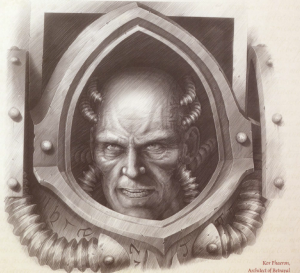 I am not Lorgar's son. I am his father, and you would do well to remember it.[10]

Kor Phaeron, also called The Black Cardinal and The Dark Cardinal[Needs Citation], was Lorgar's foster father and spiritual adviser on Colchis, and the Primarch trusted his counsel most of all. Kor Phaeron followed the Primarch through all his battles against the Covenant, providing him spiritual guidance as the battles seemed to have no end. As Lorgar took command of his Legion, Kor Phaeron became his second-in-command, becoming the First Captain of the Word Bearers Legion. Along with Erebus, Kor Phaeron was among the first of the Adeptus Astartes to fall to Chaos and create the first Chaos Space Marines by converting his Primarch and Legion.[1] He is currently the Keeper of the Faith of the Legion.[4b]

Born on Colchis and raised in an orphanage[11], Kor Phaeron was a priest of the Covenant of Colchis. After advocating that The Covenant act more aggressively in its conversions, Kor Phaeron was expelled from Colchis' capital city of Vharadesh.[11] Gathering a small following and delivering sermons in the deserts of Colchis, Kor Phaeron was preaching to a group of outcast desert nomads known as The Declined when he discovered the infant Lorgar among them. Sensing greatness in the boy and seeing him as an instrument of the Great Powers, the power-hungry Kor Phaeron took him in in hopes of using him to one day supplant the Covenant's ruling Priests. After taking in Kor Phaeron, he had the desert nomads under the chieftain Fan Morgal massacred in order to keep Lorgar's existence a secret from The Covenant.[11] Kor Phaeron went on to raise Lorgar as his own son. Despite this, he was often abusive and initially rejected Lorgar's concept of One God, instead insisting to the Covenant's concept of Four Deities.[11]

Despite their complicated relationship Kor Phaeron attempted to manipulate Lorgar to his own ends, and Lorgar remained intensely loyal to him. When Kor Phaeron ordered Lorgar beaten for a slight transgression, his enforcers refused and instead launched a mutiny. Lorgar killed the conspirators and saved his masters life, much to Kor Phaeron's surprise. Afterwards, Kor Phaeron became far less overtly cruel to Lorgar and named him the new Bearer of the Word. No longer a relationship of master and servant, Kor Phaeron became Lorgar's arch-deacon, or chief adviser and manager of non-spiritual affairs, and the two worked together to overthrow the Covenant of Colchis.[6] At this point, Kor Phaeron seemed to have some genuine fondness for Lorgar.[11] Nonetheless Kor Phaeron kept secrets from Lorgar, including his role in the Dark Heart of the Covenant that sought to elevate The Powers back to their rightful place.[9][11a]

After Lorgar's discovery by the Emperor, Kor Phaeron was found to be too old for gene-seed therapy to be inducted into the Adeptus Astartes but was nonetheless enhanced through the use of bionics, drugs, and a specially-adapted suit of power armour.[3] Although he possessed a stature and enhanced physique comparable to a normal Space Marine, the transformation was not perfect; Phaeron was often sickly, and gave the appearance of an old man laboring under the weight of his enlarged body and heavy armour.[9]

Kor Phaeron went on to become First Captain, commanding the Legion's 1st Company. However at some point during his time on Colchis, Kor Phaeron had already begun to worship aspects of the Gods of Chaos through the Covenant which he dubbed "The Old Faith". As the Word Bearers brought worlds such as Davin into the Imperium on the Great Crusade, Kor Phaeron noticed that their inhabitants' faiths resembled that of Colchis. Quietly, he kept remnants of these older faiths in place without Lorgar's knowledge in case their new faith in the Emperor were to be proven false.[3]

Ahzek Ahriman, First Captain and Chief Librarian of the Thousand Sons, spent five years attached to the Word Bearers during the Crusade, as part of Magnus the Red's effort to improve his captains' martial skills and encourage cooperation between the Space Marine Legions. Although he became friends of a sort with Erebus, Ahriman considered Kor Phaeron the personification of everything he disliked about the Word Bearers, most particularly how their unshakeable faith refused to admit conflicting facts or argument, and rejected anything that was not "right" as they saw it.[7a][7b] During the war of compliance on Heliosa, a joint effort between the Thousand Sons, the Word Bearers, and the Space Wolves, Kor Phaeron ordered the inhabitants' libraries burned, and colossal statues of the Emperor carved from the mountain ranges, acts which Ahriman saw as a terrible waste.[7b]

Several decades before the Horus Heresy, Lorgar had received a reprimand from the Emperor for the long delays in making worlds compliant, and Lorgar retreated into his quarters for a month. As the chapter orbited planet 47-16, awaiting orders from their Primarch, Kor Phaeron came at odds with Sor Talgron, Captain of the 34th Company, over how the Word Bearers should handle worlds to be brought into compliance. Kor Phaeron and First Chaplain Erebus were the only ones to be permitted access to Lorgar during his month-long retreat. During this time, the duo slowly convinced Lorgar to seek out the powers of the Warp. As Lorgar emerged from his seclusion, and commanded the elimination of the population on 47-16, it was Kor Phaeron's First Company that executed the remaining populace even after it became apparent that they were already worshiping the Emperor.[2] Kor Phaeron then helped to lead Lorgar into the Eye of Terror, where the Primarch finally accepted the Primordial Truth.[3]

Kor Phaeron became Master of the Faith, and it was he and Erebus's influence that eventually corrupted the entire Word Bearers legion, and led to the legion giving itself over to the Powers of Chaos.[1]

During the ensuing Horus Heresy, he served as Lorgar's second-in-command in the Word Bearers surprise attack against the Ultramarines at the Battle of Calth. During the fighting on Calth, Kor Phaeron attempted to turn Ultramarines' primarch Roboute Guilliman to Chaos with a shard of the Anathame just as Erebus had done with Horus, but Guilliman only answered by ripping out one of his two hearts.[5] 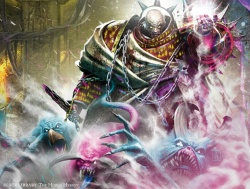 Defeated, Kor Phaeron retreated into the warp aboard the Infidus Imperator, pursued by the Ultramarines aboard the Macragge's Honour. After luring the Ultramarines into the warp, Kor Phaeron ordered his crew to turn about and attack, since destroying the Ultramarines' flagship was the next best thing to killing Guilliman himself. However, the Ultramarines' fighting skill and resolve proved the equal of the Word Bearers' zealous hatred, and the Infidus Imperator was destroyed, though not before Kor Phaeron hastily cut a hole in reality with his athame and escaped, arriving on Sicarus, a Daemon World inside the Eye of Terror. Attacked but Daemons and other warlords on the world, Kor Phaeron's party was eventually reduced to just six Space Marines and twelve mortal servants. The group is saved by a prophet known as Jepeth, who states that if Kor Phaeron sacrifices himself with his own athame that a portal to Terra to open up to allow the rest to fight alongside Lorgar in the siege. However rather than face this fate, Kor Phaeron instead has Jepeth killed and his fellowship remains on Sicarus.[12] In time Sicarus would become the homeworld of the Word Bearers following their defeat in the Horus Heresy.[1]

Since the Heresy and the absence of Lorgar, Kor Phaeron has assumed the mantle of Keeper of the Faith[4b] and often engages in a power struggle with First Chaplain Erebus. Concerned that Erebus has too much sway over the Dark Council and that he is leading the Legion down a self-destructive path, Phaeron tried to organize the Brotherhood to remove Erebus from power, but the First Chaplain was tipped off of the attempted coup by Dark Apostle Marduk.[4a] Kor Phaeron renounced all ties to the Brotherhood and kept his position within the Legion, but the animosity and distrust between he and Erebus continues.[4b]

Kor Phaeron has recently undertaken a grand operation to allow Chaos to gain a foothold in Segmentum Solar. Targeting the Veritus Sub-Sector, Kor Phaeron planned an elaborate invasion of the Talledus System shortly before the formation of the Great Rift. Upon the subsequent rebirth of Roboute Guilliman Kor Phaeron fumed at the news, but commenced with the invasion regardless when he received a vision that the Primarch would be far from Segmentum Solar due to the Indomitus Crusade. Kor Phaeron led the invasion of Benediction personally and encamped himself outside its central temple-city.[13]

Prior to and during the Heresy, Kor Phaeron wore a suit of Terminator Armour known as the Terminus Consolaris. This custom-made suit not only allowed his withered frame to exhibit transhuman strength and wield Lightning Claws, but also included life support and medical systems to keep him functioning. For ranged foes, he utilized a hidden Digi-Flamer[14]. However by the time of the Battle of Calth Kor Phaeron's true power lay with his sorcery, wielding a Athame Blade and capable of bringing down even the Primarch Roboute Guilliman with psychic blasts.[5]

Kor Phaeron is described by Xaphen, Chaplain of the 7th Company at the time of the Great Crusade as a "False Astartes". At the time of Lorgar's reunification with his Legion, Phaeron was too old to undergo the genetic modifications required to be a Space Marine, so instead his enhanced physiology was cobbled together by a combination of bionics, rejuvenating surgeries and 'limited gene forging'.[14]

This, combined with the fact that it was chiefly Lorgar's patronage that led to Kor Phaeron's promotion to First Captain, has naturally caused some distrust and resentment within the Legion, though all are in agreement that he is a wise man and a respected preacher.[3]