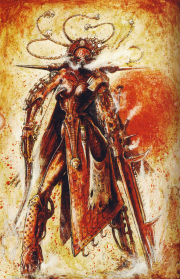 Koriel Zeth was a female member of the Martian Mechanicum who lived in the years when the Emperor began the Great Crusade to unify Mankind under His Imperium.

In that time, she achieved the position of Adept where she controlled Magma City — a Forge that was located within an active volcano. Whilst outwardly she appeared to be a loyal follower of the principles of the Mechanicum, secretly she did not believe in the existence of the Machine God and instead was more dedicated to the acquisition of knowledge. To that end, she began a secret project that involved tapping into the Empyrean as a wellspring of knowledge by way of the Akashic Reader. The designs of this device she had acquired but had failed to implement until she learnt of the existence of Dalia Cythera, whose mind was not constrained by Mechanicum dogma. With her assistance, she attempted to complete the device by channelling its energy through Psykers though there were numerous failures in the process.[1]

At the time, Mars suffered from the Death of Innocence and the rise of the Dark Mechanicum who sided with Warmaster Horus during the Horus Heresy. These corrupted members of the Mechanicum included the Fabricator-General who demanded her loyalty but she rejected them and stayed loyal to the Emperor. Despite a valiant struggle, the invaders were too many and Koriel Zeth herself was assaulted by a member of the Sisters of Cydonia. Her last act was detonating the reactors of Magma City thus killing herself and anyone else within it in order to prevent its usage by the traitor forces as well as any attempt at them to use the Akashic Reader.[1]