Krak grenades are anti-tank weapons - the opposite of the anti-personnel frag grenade - designed to "crack" open armored targets such as vehicles through a concentrated implosive blast.[1] However, the krak grenade must be placed more carefully on the target than frag grenades, because their explosive radius is only half that of a frag grenade.[2] 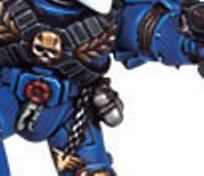 The krak grenade of the Vanguard Veteran