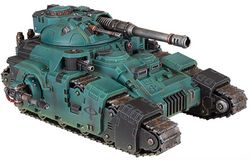 A Sons of Horus Kratos[2]

The Kratos was a Battle Tank used by the Space Marine Legions, during the Great Crusade.[1]

It served as a dedicated infantry support tank and its heavy cannon could quickly open a path through massed enemies for any infantry following in its wake. However, the Kratos became obsolete and was later retired when the Legions began to favour faster, more multi-purpose vehicles such as the ubiquitous Predator. Some were kept in the Legions' reserve armouries, though. Notably the Blood Angels Legion's Kratos tanks saw heavy usage in the Battle of Signus Prime.[1]

In terms of hitting power, the Kratos sits between the Sicaran and Fellblade. The Kratos can be armed with the Kratos battlecannon which can be loaded with high-explosive shells to kill large numbers of enemy troops, armour-piercing shells to take out heavily-armoured threats or flashburn shells against massive enemy tanks. The Kratos can also be equipped with a Volkite Cardanelle, or a Melta Blast-Gun. Additional weaponry includes a coaxial Autocannon, hull-mounted Heavy Bolters, and Lascannon, Heavy Bolter or Volkite Culverin sponsons.[2]