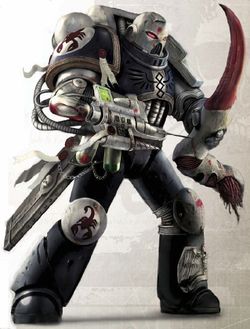 Kregor Thann is a Master Apothecary of the Red Scorpions Chapter as well as the Deathwatch.[1]

A senior Apothecary of the Red Scorpions Chapter, Kregor Thann has only relatively recently begun his Vigil and entered the Jericho Reach. A veteran of countless warzones and a master of biological weaponry, Thann gained renown as the mastermind behind the geno-tailored toxins that made the Purging of Castillium possible, defeating the horrific Thazeme when no other weapon could slay them. In the aftermath of the Purge, Commander Antir petitioned Lord High Commander Ortys to consider Thann for Deathwatch service.[1]

In 815.M41, Thann arrived at Watch Fortress Erioch and was given the details of his Vigil. Unlike most who step through the voidlocks of Erioch, Thann was not assigned to a Kill-team, but rather remains as part of Watch Commander Mordigael’s command staff, tasked with engineering a virus or toxin that could be used to combat the Tyranid menace. Nonetheless, his command experience—for Thann, like many Apothecaries in the Red Scorpions Chapter, has served as a Sergeant as well as in his role as a medic—is useful to less-experienced Kill-teams deployed to the Orpheus Salient.[1]

Thann’s duties have taken him across much of the Orpheus Salient, and he has served alongside a dozen Kill-teams in the prosecution of his duties, taking samples of various Tyranid flora and fauna, or testing recently developed concoctions in the field. To date, he has not yet found a substance that works for more than a single generation, the Tyranids adapting to overcome his creations swiftly, though his tests have still provided numerous opportunities for other Imperial forces to drive back the crippled swarms.[1]

Most recently, Thann has been operating towards the Spinward edge of the Orpheus Salient, pushing deep into the heart of the Tyranid advance. He is working under a theory that worlds beyond the vanguard will contain less-evolved or otherwise purer creatures that are closer to a theoretical genetic baseline that can be exploited. Several Kill-teams are operating deep behind the enemy lines, and Thann coordinates with each of them to gather samples and deploy newly developed bio-weapons.[1]