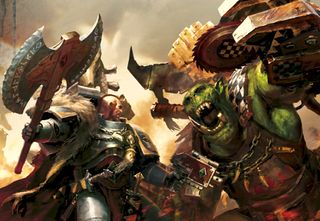 The Badge of the Sunwolf

Krom Dragongaze is a Wolf Lord of the Space Wolves.

Also known as "fierce-eye",[1] he leads the Drakeslayers Great Company[4c] and has a presence and sheer force of will capable of terrifying lesser opponents. He does not suffer fools and is known to rip the throats out of those who challenge his decisions. Highly competitive, Krom loves taking part in contests against his fellow Wolf Lords. In battle he employs many Wolf Guards, for the Fierce-eye believes that valor should be rewarded wherever it is to be found. One of twelve legendary warriors who lead that unorthodox Chapter's Great Companies into battle. Notoriously violent and possessed of a short temper, Krom has been known to let his anger govern his reason. Thankfully for Krom, his skill in personal combat and the glory he has accrued from his service to the Chapter more than makes up for any doubts the Great Wolf Logan Grimnar might have over "Fierce-eye".[1]

Clutching the rune-carved Frost Axe Wyrmclaw, and an ornate Bolt Pistol, Krom Dragongaze is a lord among men. Upon his back he wears a wolf-skull totem and his cloak is trimmed with furs. Krom's fearsome visage is one of notorious rage: his lips drawn back in a howl, wolf fangs bared, he is further accentuated by his windswept cloak and outstretched arm clutching Wyrmclaw, perfectly capturing the Wolf Lord's ferocious might and his occasionally wild, unpredictable savagery. Krom's sigil is that of the Sun Wolf, who makes the belly of the sun his lair, and attacks Fenris anew with every dawn.[1]

Krom Dragongaze's saga is long and blood-drenched, featuring heroic victories and epic duel in great number. However, though his string of victories is beyond question, there are many who mutter darkly of his methods. Krom's temper is little short of volcanic — his nickname of "Fierce-eye" stemming from the furious intensity of his rage-filled stare — and he will suffer no impediment to his perpetual hunt for glory. Krom is also partially blinded in one eye, a result of being wagered by Lukas the Trickster into engaging in a staring contest with Fenris' sun. However when the sun set, he declared his victory in the challenge.[7]

For every moment of shining heroism in Krom's past, there is an instance of bloody-mindedness or needless barbarism that overshadows it, and the Wolf Lord has been in and out of Logan Grimnar's good graces time and again. Krom is belligerent and competitive to a fault, with little humour or humility to leaven his hard-eyed aggression, and he and his fellow Wolf Lords have butted heads on many occasions. Yet for all this, Krom Dragongaze is a deadly weapon in the Great Wolf's arsenal, for his uncompromising ferocity is as dangerous to the foe as it is wearing to his allies.[1]

It is known that Krom and his Wolf Guard fought with the Orks on Alaric Prime, where they suffered a painful defeat.[2] He also is known to have saved a Knight from House Hawkshroud, causing the Knight House to become oathsworn to the Space Wolves.[3]

During the Hunt for the Wulfen Krom remained on Fenris to watch over the Fang in his brothers absence.[4a] Then after begining of the Siege of the Fenris System he joined battle on Valdrmani where with the Grey Knights and Stern himself, Krom and his warriors fought off the Daemon infestation.[4c] Krom returned to Fenris and when the battle started there, defended the Fang against enemy within.[5] Upon the formation of the Great Rift Krom Dragongaze was the first Wolf Lord to encounter the new Primaris Space Marines and enthusiastically embraced them, as opposed to the more cautious and distrustful Logan Grimnar.[8]

During the War of Beasts, Krom's Company was deployed to Vigilus after its invasion by various hostile forces. He led a Space Wolves fleet assault on the Ork Cruiser Worldsmasha, succeeding in sending the construct plummeting into Ork settlements on the planet below. He considered it a fitting spectacle to herald his arrival, but found himself in a tense relationship with Marneus Calgar and his war council. Before total conflict between these two leaders could erupt, Krom heard of a renewed Ork assault on the temple districts of Hyperia and left to deal with the threat.[6] 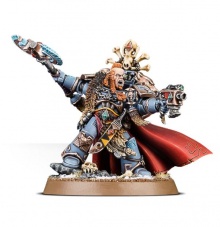