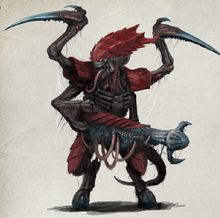 A warrior of Kronos

Kronos is a newly discovered Hive Fleet that appeared in the aftermath of the Great Rift's creation and specializes in fighting the forces of Chaos.[1a] It is currently in southern Ultima Segmentum.[3]

The raw matter of Chaos offers no nourishment to Tyranids, and this is why the Hive Fleets normally avoid areas plagued by Warp Storms and Daemonic activity. This has become more difficult, as the impure essence of the Warp increasingly pours from the Great Rift and across the galaxy. This has caused vital resources to be denied to the Hive Fleets and Kronos appears to be the Hive Mind's solution to this problem.[1a]

Due to its strong connection to the Hive Mind, when Hive Fleet Kronos travels the Shadow in the Warp is at its most suffocatingly powerful and drifts ahead of its invasion swarms. This null power is agonising to psychically active foes and drains their spirit energy to bolster Kronos' own hosts, while throwing enemy forces into fearful confusion. This greatly aids the Hive Fleet's war modus operandi, as the Tyranids of Kronos avoid engaging the forces of Chaos at close range; due to their revelment of brutal melee combat. Thus a ranged kill is a more efficient method of extermination and the Hive Fleet's warrior-forms achieve this by unleashing a storm of organic missiles in battle to destroy their foes. Currently Hive Fleet Kronos is tracing a coreward path along the line of the Great Rift and is consuming worlds that have been left purposefully defenseless by tendrils of Hive Fleet Leviathan. Kronos has used such offerings well and the growing Hive Fleet appears to be now zeroing in on areas of intense psychic activity that threaten to tear the breach between realities wider. Scores of these worlds have been conquered by Chaos Cultists and Warp-spawned abominations, but the Tyranids of Kronos have obliterated them all. Much like a maggot eating the corruption from an infected wound.[1a]

The Hive Fleet Kronos famous for its distinctive kind of weapons. For example, their Balethorn Cannon so great that can penetrate every kind of armour or energy shields of their enemies.[1b]

Unable to replenish itself from Daemons, Hive Fleet Kronos relies upon a symbiotic relationship with Hive Fleet Leviathan, which recently has begun to not wholly devour worlds since the creation of the Great Rift. Elements of Kronos follow in its larger cousins wake, replenishing its numbers from whatever remains. In this way it has moved across the fringes of the Great Rift, giving it a taste for psychic prey as a whole. This has led it to recently target Eldar Craftworlds, sorecerous cults, or Human systems in the midst of the Psychic Awakening.[4]

Battle of the Wolf's Head

An Imperial fleet under the command of Admiral Groesson is engaging a massive Chaos fleet at the Wolf’s Head Nebula when scores of bio-ships enter the battle. Ignoring the Imperial ships, the Tyranids smash their way into the Chaos formation, swarming over the colossal Despoiler Class battleship at its center. Not questioning his good fortune, Groesson unleashes a final salvo and orders the retreat.[1a]

The world of Shadowbrink, where Hive Fleet Leviathan once defeated a vast daemonic force, which now return thanks to the formation of the Great Rift. Drawn by Shadowbrink’s aura, Hive Fleet Kronos arrives in orbit above the world. The Hive Mind deposits spores and swarms of organisms at eight points across the planet’s surface. A neural node of Maleceptors and Zoanthropes leads each Tyranid host, and around these psychic organisms the Shadow in the Warp reaches such intensity that the wounds in reality begin to close. Khorne’s legions storm towards the Tyranids, but Kronos refuses to answer the charge. Instead, the Daemons are met with a storm of fleshborer fire, and Tyranid artillery organisms blast apart thousands of warp-spawned horrors. Slowly but inevitably, the Daemons upon Shadowbrink are banished back to the warp.[1a]

A tendril of Kronos converges upon an intense astropathic beacon that a hunting pack of Night Lords have been using to bait lost ships. The Chaos Space Marines scatter and launch harrying attacks against the Tyranids, hoping to redirect the larger hive fleet. In turn, Kronos disperses its bio-vessels, laying traps of its own. Unable to lure the Tyranids away from the tortured Astropaths that are broadcasting their siren signal, the Night Lords are forced to retreat.[1a]

Thousand Sons Warbands from the Cult of Manipulation have began immolating scores of worlds in sacrificial rituals before the coming of Hive Fleet Kronos. Its not known, however, if these sacrifices are being done to repel or lure the Hive Fleet.[2]