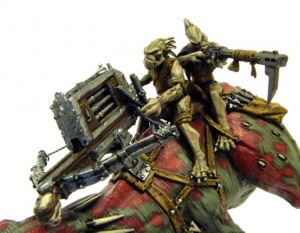 The Kroot Bolt Thrower is a primitive but effective weapon used by the Kroot since long before they encountered the Tau Empire.[1]

Like Kroot Rifles and guns the Tau have aided their auxiliaries by using Tau technology to improve the Kroot’s weaponry. Instead of the basic sharpened bolts the Tau provide impact fused explosive tips, making them far more dangerous. These tips are a smaller version of the warheads used in their own missile pods. The bolt thrower is fired by an ingenious hand-crank system which drops bolts from the magazine into position and quickly re-draws the bow string, allowing it to keep up a high rate of fire for little effort on behalf of the crew.[1]

The Kroot Bolt Thrower often attached to the back of the Great Knarloc to enhance its battle abilities.[1]