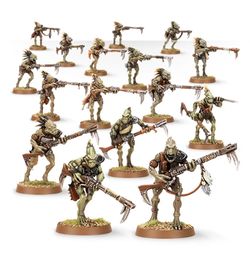 A Kroot Carnivore Squad is a Kroot mercenary squad in service to the Tau Empire.

These squads are the most common auxiliaries who serve alongside the Tau armies, since the Kroot pledged large numbers of their warriors exclusively to the Tau in thanks for their liberation from the Orks. Despite their alien nature, including the unfortunate habit of eating the corpses of their enemies, these Kroot are afforded virtually the same respect as any other Tau. This is not only for their military prowess, especially compared to the less physically able Tau, but for their self-sufficiency and prodigious fieldcraft.[1a][2]

While these Kroot warriors have a strict code of honour, at heart they are still mercenaries, fighting for reward rather than for idealism or some noble cause.[1a]

Each squad numbers anywhere from ten to twenty Kroot, sometimes including a Shaper to lead them, and are armed with Kroot Rifles, while Shapers may sometimes be gifted with a Pulse Rifle or Pulse Carbine by the Tau. Some squads will go into battle with a pack of up to a dozen Kroot Hounds, vicious and bad-tempered animals which the Tau find repellant,[1b] as well as a herd of up to three Krootox, large beasts armed with a mighty Kroot Gun.[1c][2]