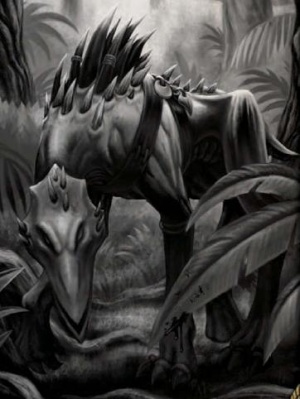 The Kroot Hound is an evolutionary dead end of the Kroot. They are quadrupedal pack hunters. They are often utilized by the Kroot for hunting and in war.

They are highly intelligent creatures, able to understand orders, but highly temperamental, prone to attacking their keepers. They are the size of a large dog, with a series of sensory ganglia running along their spine. They have wiry frames, just like the Kroot themselves, and possess a toughness that belies their apparent fragility. Facially, Kroot Hounds are ugly beasts, sharing the underbite beak of the Carnivores.[3]

Kroot Hounds serve many functions within Kroot society. They serve as watch-beasts in Kroot settlements, in this role, they are able to detect the approach of even the stealthiest foe, through a combination of sensory input gathered by the ganglia along their backs. Should any creature other than one of the Kroot genus approach, the Kroot Hounds will emit a fearful shrieking and snarling sufficient to deter most infiltrators from pressing on. When accompanied by a handler, the Kroot Hounds can be trained to emit low sounds that do not alert the intruder to discovery, allowing the Kroot to set up and spring an ambush on their foe.[3]

They are also used to patrol the area around a Kroot camp. If there are no Tau around, the Kroot sometimes set the hounds free in the knowledge that they will hunt as a pack, ambushing any they encounter. If there are Tau or other allies in the vicinity, the pack is accompanied by one or more Kroot handlers in order to avoid any unpleasant incidents.[3]

They also serve as guards for high-ranking Kroot such as Shapers and Master Shapers. The handlers must be fleet of foot indeed to keep up with their charges, for the Kroot Hounds are used to move swiftly around the flanks of the enemy and launch lightning-fast attacks upon exposed foes. When attacked by large numbers of Kroot Hounds, even the largest of foes can be dragged down killed. Many an Imperial Guardsman has faced execution for running away from them.[3]

Kroot Hounds are an evolutionary dead-end (Niche Trophic), but unlike other dead-ends they are not hunted to extinction by other Kroot. It is likely a Kindred consumed too many quadrupedal animals and changed into Kroot Hounds. They can be released into combat and have their own special attacks. 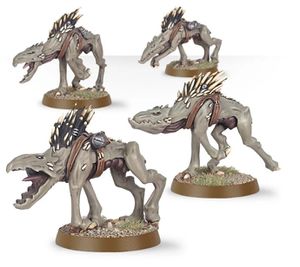