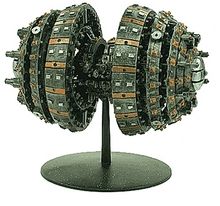 A Warsphere is a Kroot space ship. They are the last vestige of the power and advancement of the Kroot prior to their move away from technology.[1] Each Warsphere resembles two ringed citydomes cut from a planet's surface and welded on either side of a massive spindle.[2]

Unlike the Tau, the Kroot have no difficulty using warp-drives to travel between stars. Their exact methods of doing so has been kept secret from their Tau employers. They appear to have a natural affinity for navigating towards inhabitable planets, almost like a sixth sense.[1]

The interior of Warspheres feature metal work and murals reminiscent of the Kroot's arboreal origins. Pipes and cables are shaped like metal vines and roots, and the air is warm and humid.[6]