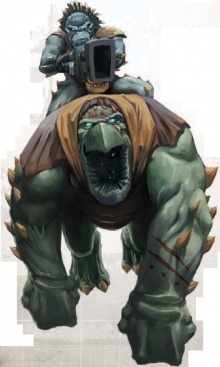 A Kroot riding a Krootox[Needs Citation]

A Krootox is a large beast used in Tau or Kroot mercenary forces.[1]

Krootox are a dead-end evolutionary path from Kroot who consumed the flesh of especially muscular and barbaric beasts, losing their intelligence. The result is a hugely muscled, oversized variant of Kroot physiology, its mind capable of little more than unreasoning brutality. If not for the Kroot using them as beasts of war, the Krootox might have died out generations ago, but instead, they are a common sight all over the Tau Empire and beyond.[1]

Kroot Herders saddle the Krootox and mount on their backs a Kroot gun - an overlarge version of the Kroot rifle - which is crewed by a single Kroot rider. The They are large and solid enough to provide a stable and mobile firing platform for the weapon, while at the same time serving as powerful assault troops in close combat, and while relatively placid under the control of a Kroot, the Krootox becomes enraged by the presence of an enemy and their huge powerful arms and fists are capable of caving in vehicle hulls and power armour with equal ease.[1] 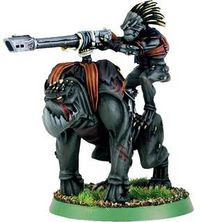