From Warhammer 40k - Lexicanum
(Redirected from Kruellagh the Vile)
Jump to: navigation, search 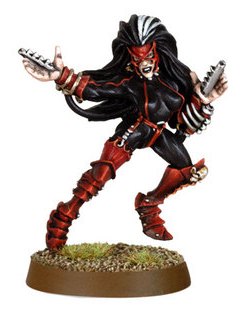 Kruellagh is the Archon of the Kabal of the Flayed Skull. She was first encountered by the Imperium of Man on 6129967.M38.

She is usually referred to as Kruellagh the Vile although she is known by many other aliases, such as "The Mistress of Skulls", "The Emasculator", "Da Skinna" (by the Orks), and "Mistress Hell Fury".

The elite warriors she personally commands within the Kabal are known as "The Emasculators", known for lightning-fast precision assaults.

Kruellagh has a few pieces of equipment customized to suit her combat style and purpose.

The Soul Flayer is Kruellagh's primary weapon, and the source of most stories about her. It is composed of a pair of two extremely sharp spikes that extend out from her palm. The spikes house tubes through which the victim's vital fluids are drained directly into Kruellagh, energising her, making her stronger and faster with each kill.

Kruellagh namewise appears to be based on Cruella de Vil, the villainess of the Disney film 101 Dalmatians. The two characters also wear similar colours.