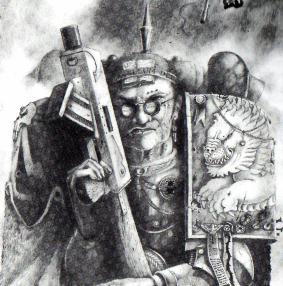 Fidus Kryptman[6] is an Inquisitor Lord of the Ordo Xenos[2], also known as the Hero of the Macharian Heresy. He is best known for being the first to formally recognise the Tyranid threat to the Galaxy and has fought in all three major Tyrannic Wars.[1]

Role in the First Tyrannic War

Upon coming across the recently ruined Dead World of Tyran, Kryptman uncovered a protected data-codex and learnt about the unknown, cataclysmic alien race which had destroyed the world. After the planet Tyran, he gave the new alien threat the designation "Tyranids".[4]

He went on to warn Marneus Calgar, Chapter Master of the Ultramarines, of the oncoming Hive Fleet Behemoth. This allowed the Ultramarines to prepare for the conflict and to summon support from Battlefleet Tempestus, allowing them to defeat the Hive Fleet.[3]

Role in the Third Tyrannic War

Inquisitor Kryptman became involved in the defence of Tarsis Ultra during 999.M41 when a tendril of Hive Fleet Leviathan was discovered to be moving towards the planet. Imperial forces arrived to defend the planet, which consisted of the Ultramarines Fourth Company led by Captain Uriel Ventris, a detachment from the Mortifactors led by Chaplain Astador, the 10th Logres Regiment led by Colonel Octavius Rabelaq, the 933rd Death Korps of Krieg led by Colonel Trymon Stagler, and the PDF regiments headed by Major Aries Satria. Kryptman was on hand to share his extensive knowledge of the Tyranids with the commanders in aid of the war effort. He was also accompanied by Magos Biologis Vianco Locard, an expert on the Tyranids, and a Deathwatch Kill-team led by Captain Bannon.[2]

Despite an initial victory in destroying a Hive Ship during a space battle, Inquisitor Kryptman wished to invoke Exterminatus upon the world of Chordelis, the next planet in the path of the Tyranids. This was to prevent it from being devoured and swelling the Tyranids' numbers, as planetary evacuation was too slow. Captain Ventris vehemently opposed this decision and supported an alternative solution proposed by Lord Admiral Lazlo Tiberius, to slow down the Tyranids by exploding a hydrogen-plasma refinery in space to destroy another Hive Ship. However, Kryptman had lied to Ventris and with the assistance of the Mortifactors invoked Exterminatus anyway.[2]

During the repeated Tyranid attacks on Tarsis Ultra, Kryptman, along with his retinue, studied the biology of the Tyranid corpses killed in combat. During one expedition, a Lictor which had earlier landed on the planet, attacked his team but was fended off by the Deathwatch; Kryptman immediately ordered Captain Bannon to capture the Lictor without killing it, which they did. This proved pivotal to the war, as Magos Locard was able to concoct a poison from the Lictor's genetic structure that would allow them to defeat the entire swarm by infecting the Norn Queen aboard the last remaining Hive Ship. The Deathwatch team, led by Ventris, accomplished this mission, ending the war shortly before the few remaining defenders were overwhelmed by the hive swarms.[2]

After one of the two tendrils of Leviathan was destroyed on Tarsis Ultra, contact was reestablished with the worlds between the two tendrils of Leviathan, which previously had been smothered by the Shadow in the Warp. This made Kryptman aware of the fall of numerous worlds within this region, each one swelling the ranks of the hive fleet. With a grim determination, Kryptman began exterminating worlds in Leviathan's path, creating a galactic cordon. Any world within this cordon would undergo Exterminatus as soon as the Tyranids invaded, the virus bombs destroying all life on the planet. This would cause the Hive Fleet to expend large amounts of resources to invade a planet, resources that would then be lost with the planet's destruction. Billions died, in the largest act of genocide the Imperium has faced since the Horus Heresy. As a result, Kryptman was declared a traitor, a fool and a radical, and a Carta Extremis was issued for him, stripping Kryptman of his title and condemning him to death, should he be apprehended. However, these harsh measures slowed Leviathan's advance to a crawl.[3]

Kryptman observed the war between Tyranids and Orks on the world of Tesla Prime, where these two enemies of the Imperium locked each other in a long and bloody conflict. Seeing this as a way to slow or halt Leviathan without further loss of human life, Kryptman and a Deathwatch team loyal to him embarked on a dangerous mission on the planet of Carpathia to capture a brood of live genestealers. At the cost of many Deathwatch lives, the genestealers were placed in a stasis field and then unleashed in the space hulk Perdition's Flame. The Deathwatch and Kryptman then detonated a nearby moon, sending the hulk hurtling into the Ork Empire of Octarius. The genestealers quickly infected the Orks that attempted to raid the space hulk, causing the infection to flourish and quickly reach all corners of Octavius. Soon the psychic signature of the genestealers was strong enough to attract the second tendril of Hive Fleet Leviathan, causing it to veer away from Imperial space. Leviathan is currently engaged in a protracted war with the Orks.[3]

However, Kryptman seems to have overlooked the fact that whichever side emerges victorious from the Octarius War will surely be far more powerful than they were before[3] — a fact which left the Ordo Xenos with "an unholy mess to clean up" well into M42.[3][5]