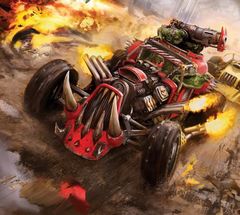 The Kustom Boosta-blasta exemplifies everything that a Speed Freek looks for in a vehicle: fast, heavily armed, and boasting a capacity to set things on fire simply by overtaking them. The vehicle is the favored mount for Meks for whom going fast and blowing things up has become a creed. Such Meks are so obsessed with being in their vehicles that they may even build themselves into the chassis, essentially becoming an centauroid Cybork whose legs have been replaced by an entire Warbuggy.[1]

The main weapon of the Kustom Boosta-blasta is an enormous turret-mounted Rivet Gun. This fearsome tool-cannon launches heated rivets as long as a mans forearm at a high rate of fire. Though not accurate, this weapons weight of fire more than makes fun for its imprecision and the heated rivets are able to pierce through even Power Armour. As the boosta-blasta roards towards the enemy, its crew begins to chant 'Burn 'em up!' at an increasing pace. Then, as the buggy roars past the foe, the Grot in the passenger seat pulls his fire-lever, causing rows of exhausts lining the vehicle to project tongues of flames that engulf everything nearby. So do Kustom Boosta-blasta leave twin paths of flame in their wake as they hurtle across the battlefield. When an entire mob of these vehicles thunders through enemy lines, they create a fiery trail known as 'da burnin highway'.[1]

The Kustom Boosta-Blsta is seen in the Evil Sunz in especially large numbers, for it perfectly suits their way of war. Many of their warbands field multiple boosta-blasta mobs that spearhead mass charges by Evil Sunz Warbikers.[1] 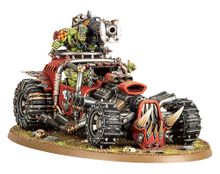