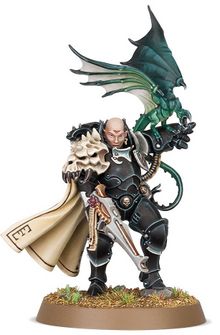 Kyria Draxus is a Radical Ordo Xenos Lord Inquisitor, who is one of the Imperium's premier Necron hunters.[1]

Kyria Draxus is an audacious Lord Inquisitor of the Ordo Xenos who specializes in countering the Necron threat. She is considered a Heretic by some of her peers due to Draxus' use of Xenos technology, such as the Eldar shuriken catapult she wields in battle and an armor array which incorporates xenos technologies. She has decades of contact with the Eldar due to the race's mutual hatred for the Necrons. The aliens helped tutor her in the art of technology and psychic ability.[3a]

The Inquisitor Lord is aided by her faithful Wyvachs familiar Shang. They possess a deep psychic bond, and it is said that Draxus can see through the eyes of the winged creature[1]. During the Psychic Awakening, the Inquisitor Lord allied with the heretical Battle Sister Ephrael Stern and the Harlequin Kyganil, to combat a rising Necron threat against the Imperium.[2]

During an engagement in the Tredica System, Draxus and her forces were confronted by a contingent of Necrons led by Szeras. A brief skirmish within a tomb ensued, which ended when Draxus used her power fist to release a bound C'tan shard. The shard teleported the Imperial forces back to their fleet, likely to begin a rampage against the Necrons.[3]

During the War in the Pariah Nexus Draxus revealed her ties to Xenarite Tech-Priests, lading them in a raid against a Necron Pylon complex in order to steal Mnemetic Crystals. It is through the study of these crystals that she learned of Szarekh's return to the galaxy.[3]

Draxus's armory consists of a variety of weapons of both human and xenos origin. Most often, she uses an Eldar shuriken launcher named Diresinger, as well as a power fist.