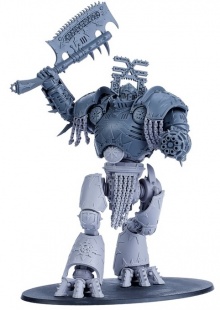 The Kytan is a Daemon Engine of Khorne.[1]

Forged by the most malign Warpsmiths and Dark Magos as an act of their devotion to the supreme lord of blood and battles, Kytan Daemon Engines stride across the battlefields of the 41st Millennium eviscerating all who dare oppose them until their hides of brass and blackened iron are bathed in blood and hung with gore. Their thirst for battle is rarely quenched, and they will continue to slaughter foe after foe until the battlefield is slick with blood and little is left alive.[1]

As tall as a Cerastus Knight, an individual Kytan’s upper torso echoes the design of the feared Lord of Skulls, and its powerful lower limbs give it both height and speed. Armed with a potent Kytan Gatling Cannon, its true weapon of choice is the Great Cleaver of Khorne, which it wields to deadly effect. When attacked, the Kytan is warded by daemonic rites and the powers of the Warp to resist damage inflicted upon it by those few lucky enough or skilled in the ways of fighting such an abomination to survive its initial assault.[1]