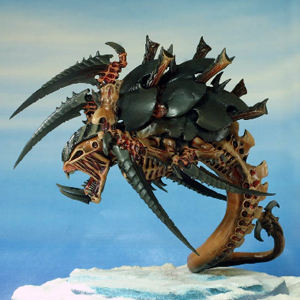 The Laius Horror is the product of a frozen Tyranid Hive Ship near Laius Rift that was isolated from its parent fleet. It is approximately 1/3 larger than a Carnifex.[1]

The Laius Horror employs a chilling and never before encountered hunting technique: it remains hidden amongst its prey until just the right moment to reveal itself and feed. Eyewitness accounts describe the creature bursting forth from its host in a shower of gore as the host screams for help and attempts to reach friendly lines. It remains unknown how such a large creature manages to hide within a human.[Needs Citation]