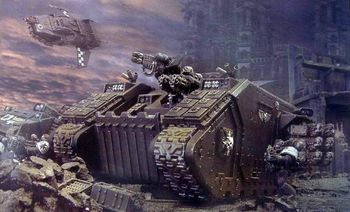 The Land Raider Crusader is an assault-based version of the Land Raider used by the Space Marines. It has several modifications to allow it to assist warriors assaulting out of the front hatch. It also has a much greater transport capacity due to the removal of many of the large energy generators needed to power the Lascannons, and special frag charges to fill the air before it with lethal shrapnel and cover the disembarking Marines.

The Land Raider Crusader design originated from the Jerulas Crusade in 645.M39[Conflicting sources] when Artificer Simagus of the Black Templars used ancient techno-arcana, recovered from the long-forgotten depths of a captured Hive City, to develop what would become one of the most feared tanks in the Imperium. As tales of the Crusader's successes spread, many other Chapters began to request information regarding its remodeling. Eventually the Adeptus Mechanicus of Mars officially recognized the Crusader pattern in 763.M39, although by this point it was a mere formality since the design had already spread to hundreds of Chapters.[3]

The Crusader's most significant departure from the original vehicle comes in its armaments, with the sponson-mounted lascannons replaced with Hurricane-pattern bolters, the hull-mounted heavy bolter replaced with twin-linked Assault Cannons, and several Frag Assault Launchers studding its hull. These numerous short-ranged, rapid-firing weapons allow the Crusader to lay low the enemy before disgorging its embarked passengers and provide them with superior fire suppression. In compensation for the loss in anti-tank firepower the pintle-mount was converted to carry a Multi-melta, which also serves to breach defences and clear anti-tank obstacles.[1][2] The first Crudaders of the Black Templars didn't have multi-meltas, but after several battles a multi-melta was added to the heavy transport due to its necessity.[1]

With the removal of the bulky generators needed to power the lascannons the Crusader can carry up to sixteen Space Marines or eight Terminators, the largest transport capacity of any Land Raider variant.[2] Carrying so many additional troops also necessitated the adding of Extra Armour and structural supports to the vehicle which, due to the additional strain on its engines, also reduces the Crusader's top speed slightly[1] A standard Crusader also mounts Smoke Launchers and a Searchlight along with the option to carry a Hunter-Killer Missile[2]