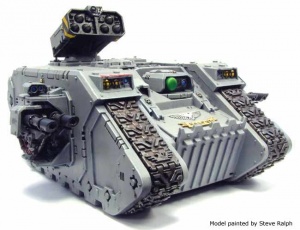 The Land Raider Helios is a variant of the Space Marines' Land Raider, designed as a stop-gap measure for long range artillery support.[1] The Hyperios variant is used as an air defense vehicle.[3] Since its first introduction, it has been adopted by a number of Chapters, though it still remains an uncommon sight on the battlefield.[1]

In 857.M38, the Red Scorpions were embroiled in the legendary "Siege of Helios", where they found themselves lacking in sufficient artillery to breach the walls or suppress the defenders in their sector. The Red Scorpions, being an especially insular and independent Chapter, refused to call upon the local Imperial Guard for assistance, and instead the Chapter Master directed his Master of the Forge to produce a solution. In response, they converted all twelve of their Land Raiders into what became known as the "Helios" pattern. The new Land Raider Helios, in combination with the Chapter's Whirlwinds, proceeded to knock down the offending walls and assaulted the defenders with success.[1]

Later this pattern of Land Raider was borrowed by other Chapters, and the Land Raider Helios were deployed when armoured artillery support was needed.[4] The Land Raider Helios pattern has proved itself useful in traversing through the especially dangerous and difficult terrain impassable for the less armoured Whirlwind. Such dangerous war zones include those set within magma seas, fractal crystal forests, and carnivorous jungles.[5]

The main difference between the Helios and the standard Land Raider is the addition of a Whirlwind multiple missile launcher besides the two Twin-linked Lascannons. The trade-off is that some of the transport capacity is given over to missile storage; the Helios pattern can only carry six Space Marines in normal power armour and only three in Terminator Armour.[1]

Besides a Searchlight and Smoke Launchers, the Land Raider Helios can be upgraded with Extra Armour, a Hunter-killer Missile, and a Pintle-mounted Storm Bolter. It may also replace its Whirlwind launcher with a Hyperios missile launcher, turning it into an air defense vehicle in situations where air support is not available.[2]