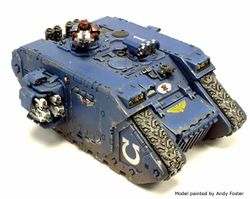 The exact origins of the 'Prometheus' pattern Land Raider remains a mystery. Some Tech-adepts believe it to be a variant of the 'Tartarus' pattern Land Raider, due to the striking similarities between the two. Although no clear evidence has been found to support this claim[4a] there is at least one archival report that depicts the vehicle, or else one that closely resembles it, that fought on the side of the Loyalists during the early period of the Horus Heresy.[4b] Others believe that it was the Salamanders which first produced it as they retain more Prometheus models, than any other Chapter (however, the Salamanders deny this claim). In any case, the number of Chapters which do have a Prometheus within their Armouries is unknown.[1] For example, the White Scars only have four of these Land Raiders.[3] There is even another version that the origins of 'Prometheus' where in fact founded by the Landites - followers of the famous Arkhan Land.[4a]

The most famous example of a Prometheus used in battle during the Masali Campaign, when Captain Cato Sicarius of the Ultramarines used his Prometheus to turn the tide of battle against Eldar pirates, in the process earning the first-class Marksman's Honour badge.[1]

The primary differences between the Prometheus and standard Land Raiders is its armament and equipment. The lascannons normally mounted in the side sponsons are replaced with two twin-linked heavy bolters, with a pintle-mounted storm bolter replacing the hull-mounted heavy bolters. These changes are necessary to make room for the additional command and control equipment.[1]

Supplementing the Land Raider's tactical holosphere and squad status displays is a set of gear very similar to that found in a Damocles Command Rhino; though not as extensive or advanced, it still allows the Prometheus to coordinate between the battlegroup and allied forces, intercept and decrypt enemy communications, and track their movements with multi-spectral auspex gear. The trade-off comes at the fact that the Prometheus still functions as a front-line combat vehicle, allowing the Space Marine Commander to lead from the front.[1]

The Prometheus's transport capacity is only slightly diminished by the equipment as it is able to carry ten Space Marines in power armour or five in Terminator armour.[1] Besides a Searchlight and Smoke Launchers it can be further upgraded with Extra Armour, a Hunter-Killer Missile and a pintle-mounted Multi-melta.[2]