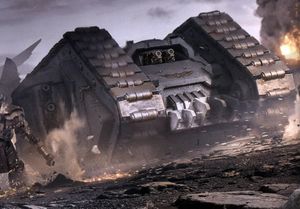 The Proteus was first forged sometime during the Dark Age of Technology or before, but rediscovered during the Great Crusade. It contains extraordinarily powerful augury systems, allowing it to scan battlefield conditions with extreme precision. Due to this improvement, it has been thought that this tank is the origin of all modern Land Raider designs, intended to explore and conquer new worlds. Its sensor systems make it useful as both a command tank and the leader of an armored spearhead; however, due to the fact that it lacks a forward assault ramp and has a lower troop capacity, as well as being harder to reproduce, makes it a rare sight in the 41st Millennium. Despite this, it is still valued as a rare war relic by the Space Marine Chapters lucky enough to own them. [1]

During the Horus Heresy, some Traitor Legions managed to acquire some Proteus variants and take them with them into the Eye of Terror, where the Dark Mechanicus attempts to keep them battleworthy. Much of the time, the Dark Mechanicus replaces any failing components with devices of Chaotic origin.[1]

The Land Raider Proteus is armed with two sponson-mounted twin-linked lascannons, in addition to its auguries and cogitators. They also contain a Machine Spirit (or in the case of Chaos variants, an Infernal Device), and can be upgraded with hull-mounted Heavy Bolters or Heavy Flamers, Ceramite armour to lessen the damage of Melta weapons, a Hunter-Killer missile (or Havoc launcher with Chaotic variants), pintle mounted weapons, Extra Armour, and a Dozer Blade.[1]

Some Land Raider Proteuses were also equipped with an Explorator Augury Web.[2] 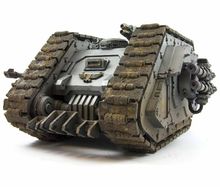