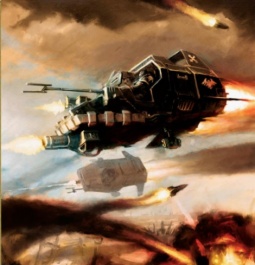 Land Speeders are based on STC data recovered in M31 by the famous Techno-archaeologist Arkhan Land, and afterwards became widely produced and used throughout the Imperium. Land Speeders were also originally used by the Imperial Guard, but since then the plasma and anti-gravity technologies required to produce them have become increasingly rare and hard to maintain.[1a] Only extremely resource rich planets like Ryza[Needs Citation] or organisations such as the Space Marines can afford to create them. There are 50 plus Land Speeders in a typical Chapter.[1a]

The anti-gravitic plates which give the Land Speeder its ability to fly remains a mystery restricted mostly to the Tech-Magos of the Adeptus Mechanicus. Placed around the nose and cockpit of the vehicle they create an inverse gravity field which, in combination with afterburning ramjets, allows it to climb to a height of one hundred meters but the official doctrine dictated that Land Speeders should use the ground as cover and don't climb up to high height.[1a] Though its anti-gravitic plates won't function at higher altitudes, they can be used to perform a control descent at these heights, allowing their deployment from an overflying Thunderhawk for rapid assaults.[2]

The Land Speeder is lightly armoured - indeed the power armour of its Space Marine crew provides them with more protection - instead relying on its speed and maneuverability to avoid enemy fire.[2] Its primary armament is a Heavy Bolter, although this is replaced in some Land Speeders with a Multi-Melta for anti-armour firepower.[1f]

The advantages of the Land Speeder is that it can be tasked to fulfill a variety of missions. These can range from light reconnaissance to tank-hunting and search-and-destroy operations. Land Speeders are typically fielded in squadrons of one to three vehicles, and normally piloted by Assault Marines, with each Battle Company maintaining its own stockpile. However, the majority are held by the Chapter's Reserve Companies, with the 7th Company trained and equipped to deploy en masse on Land Speeders, acting as a fast-response strike group which can be used to respond to enemy penetrations or exploit a hole in their battle lines.[2] On average the typical Chapter will have between fifty to seventy Land Speeders of various types, though this varies depending upon the Chapter's wealth or tactical doctrine. For example, the Dark Angels and White Scars, along with their successor Chapters, each field several hundred Land Speeders.[3]

Land Speeder Typhoons are a more heavily-armed version of the standard Land Speeder. In addition to the Heavy Bolter, it mounts twin-linked missile launchers. The heavy bolter can also be replaced with a multi-melta.[1f] 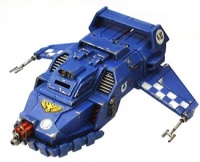 The Land Speeder Tempest is unique for being fully enclosed, forgoing the Land Speeder's long-range patrol role to become a dedicated gunship.[1b]

The Tempest was first fielded by the White Scars in M38 during the Evacuation of Barac. A squadron of three Tempests, led by Veteran Sergeant Jegun, was credited with destroying a traitor[1b] Flaming Skulls[7a] Reaver Titan that was about to overrun the Chapter's command post. Sergent Jegun was killed when the Reaver fell on his Tempest and destroyed it, but his heroic sacrifice started a tradition of the White Scars naming one Tempest squadron "Jegun's Avengers". Other Chapters have used plans provided by the White Scars to create their own Tempests, such as the Dark Angels' Ravenwing, although they remain less common than Tornados and Typhoons.[1b]

Slightly larger than the standard Land Speeder, the Tempest carries heavier armour and weapons. To save on weight, the gunner is replaced with a slaved targeting system with the pilot's aim assisted by a Machine Spirit. Weaponry includes a fixed-forward Assault Cannon and twin-linked Missile Launchers controlled through a multi-spectral targeting surveyor. Despite the heavier armour, standard combat tactics remain the same, with Tempests flying nap-of-the-earth to avoid enemy fire.[1b] 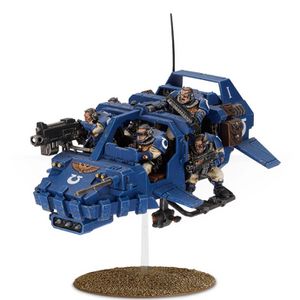 Land Speeder Storms are significant modifications to the standard Land Speeder, designed for use by the Chapter's Scout Squads. Though equal to the standard model in speed and maneuverability, it trades it's heavy armament for the ability to carry five Marine Scouts into battle. It is further altered with baffled engines and a sophisticated spy array, allowing for stealthy insertions behind enemy lines.[2]

The weapons include a standard Heavy Bolter and a light Cerebus Launcher, a tri-barreled missile launcher capable of shooting frag, stun and blind rockets or other types. It is also equipped with an advanced jamming beacon that operates in both electro-magnetic and etheric bands, allowing it to interfere with enemy communications and cause teleport homers to malfunction within its area of effect. The heavy bolter can also be replaced with a heavy flamer, multi-melta or assault cannon.[2]

The exact origins of the Land Speeder Storm is unknown; it sees extensive use by the Ultramarines and Raven Guard, along with their successors, and so is thought to be one of their inventions. Conversely, the Storm is all but unheard of within the armouries of the Space Wolves and Blood Angels.[3]

The Land Speeder Proteus was a pattern of Land Speeder used by the Legiones Astartes during the Great Crusade and Horus Heresy.[8]