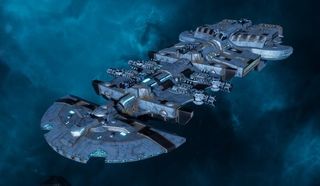 The Lar'shi Class Starship — codenamed "Hero" — was born out of the Damocles Gulf Crusade.

During that conflict, the Tau had been shown first-hand where the Kor'vattra was lacking, and attempted to design a ship that could match the Imperium's Lunar Class Cruiser. Although the resulting vessel was still no match for a comparable Imperial warship, the vessel that resulted was nonetheless a credible ship of the line.[1]

As a purebred combat ship, the Lar'shi is significantly more effective in a straight-up firefight than its Gal'leath and Il'fannor predecessors. In its primary Vash'ya configuration, the Lar'shi packs a great deal of firepower in the form of a forward Gravitic Launcher, a forward Railgun turret, two launch bays for Barracudas and Mantas, and a pair of Ion Cannon turrets, the latter of which are replaced by slightly weaker but longer-ranged Railgun batteries in the less-common Tolku variant. Both versions are protected by a Deflector that enhances their forward armour, allowing them to survive a head-on confrontation and bring their weapons' overlapping fields of fire to bear on an enemy.[1]