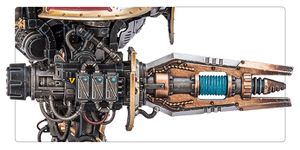 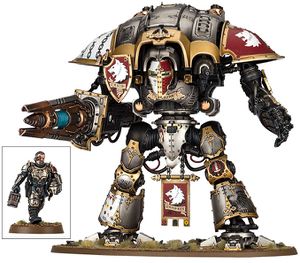 The Las-Impulsor is a weapon used by Imperial Knight Preceptors.[1]

The las-impulsor is a ferociously powerful gun that, while comparatively short ranged for such power, is more than capable of bringing a fortress down in ruins or scything the leg from under an enemy Titan with a single concentrated shot. The weapon works by building up an enormous charge of energy within capacitor shrines before cascading it down poly-sanctified conduits in escalating pulses. The result is a lightning-fast and devastating volley of laser blasts that can strip force shields from enemy war engines one at a time, and hammer their way through even the thickest armour or chitin to annihilate the vital systems beneath.[1]

Twice during the Imperium’s history has the technology to create las-impulsors been thought lost. In the era of the Great Crusade, the weapons were produced solely upon a trio of forge worlds that were famed for their skill in creating and innovating laser weapons. These planets, known collectively as the Deuterium Stars, possessed the secrets, and their Tech-Priests were deeply respected by their peers. During the Horus Heresy, one of the Deuterium Stars, Fusiria, turned traitor, while the other two, Magnax and Artos-Rho IV, were both overrun and destroyed. As a result of that threefold tragedy, Knights Preceptor became an increasingly rare commodity amongst the Noble houses, for their primary weapon could no longer be manufactured or maintained. In M34, an Adeptus Mechanicus Explorator fleet scoured the Flensed Worlds for hidden knowledge and ancient archeotech. Supported by the Knights of House Krast, they successfully drove back the barbaric greenskins that had made the worlds their home, and liberated a great bounty for the Omnissiah. Amongst those riches was an STC for the las-impulsor, which was quickly – if respectfully – pressed into service. So it was that House Krast were honoured with the first new wave of Knights Preceptor, and have possessed a disproportionately large number of them ever since. Gradually, replacement weapons and entire new chassis made their way out to numerous Knight worlds, and the Knights Preceptor became prevalent again.[1]

It was in early M38 that a sizable force of Chaos Space Marines descended upon the forge world of Ixas, where the holy las-impulsor STC was housed. Sweeping aside all resistance, the Chaos worshippers stole the device and bore it away into the Maelstrom. Thus was las-impulsor technology lost for a second time, and many corrupted Daemon Engines fashioned to torment the Imperium. Yet this was not to be the end of the story. It was the Freeblade Moritor Repugnum that led a crusade force of Black Templars into the Maelstrom and tore the las-impulsor STC from the the Dark Mechanicum. The machine was returned to Ixas with great ceremony in mid-M41, and has been in use ever since.[1]