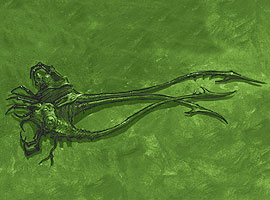 A Lash Whip is a Tyranid Bio-weapon.[1]

The Lash Whip takes the form of a living whip with one[1] to three tentacles of muscle and sinew that writhe of their own accord and strike at their prey, too fast to be dodged or parried, independently of their wielder's actions. Enemies that are not sliced apart by the bony hooks at the end of each tentacle are aimed to be captured and ensnared so they become easier prey for the Tyranid in control.[1][2] A Lash Whip has a small body contained within a bony tube which forms the handle of the whip, and has three tentacles which form the rest of its body. The creature survives by slicing flesh from its victims and consuming them.[3]