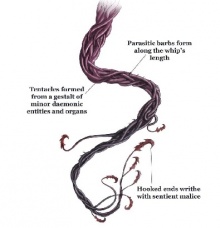 The Lash of Torment

The Lash of Torment is a Daemon Weapon wielded by Lucius the Eternal. While roaming the dreamscape of the Daemon world Moerpho, Lucius tracked down and killed a trio of Fiends of Slaanesh. Before their corpses faded into nothingness, he tore out the long and supple tongues of the daemonic beasts and fused them to his grip with a ritual of binding. From these loathsome organs, Lucius has fashioned a whip that writhes with a sentience of its own, ensnaring his foes and rasping their flesh from their bones as Lucius goes about his bloody work.[1]