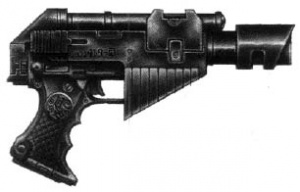 The laspistol (also known as blazer or blooger)[1] is a smaller, more compact, pistol-version of the lasgun. They are the default firearms of Imperial officers who do not have access to more expensive equipment, such as plasma pistols or bolt pistols.

There is little standardization in the design of laspistols, most worlds producing their own versions. The most unconventional designs are the derringer-type pistols and the ornate and hand-crafted dueling pistols. The Imperial Guard Rough Riders are armed with a Laspistol due to their assault-oriented role. Some soldiers may change their equipment to include the popular combination of Laspistol and Close Combat Weapon, usually the veteran squad members. A Commissar is often equipped with a Laspistol and Close Combat Weapons to allow him to lead the men from the front and show that he is with his men rather than using officer class weaponry that Guardsmen don't have access to. A laspistol does not have anywhere near the range of the lasgun, as the power of the las-bolt dissipates into the atmosphere after only a short distance. However, within its limited range, it has the same devastating result as a lasgun, producing an explosion upon contact with a target. The laspistol lacks the lasgun's selective fire options, having only the ability to fire single shots.[2] The limited range of the weapon makes it primarily used for gaining an extra attack in close combat, and actually shooting the gun is sometimes foregone in favour of this attack. Laspistols are mainly used by Imperial Guard Officers and advisers, including Commissars, Techpriest Enginseers and Sanctioned Psykers.[Needs Citation]

This pattern is a standart issue to NCOs and officers in the Regiments of Cadian Shock Troopers.[8a]

Also produced on Accatran, this heavy laspistol utilises the same powercell as the Accatran pattern lasgun. It is issued to officers and specialists. Elysian Drop Troops are known to make use of this model.[7]

The Belasco Dueling Pistol is a type of Laspistol often used for ostentatious displays of wealth and status. Most types can fire only a single powerful las-blast before needing reloading, but they are extremely accurate over long ranges.[9a]

The Dervish laspistol was originally created by the Hox Conglomerate in the Calixis Sector as viable laser weapon alternative to stub weapons produced in Gunmetal City on Scintilla. It never truly caught on amongst the criminal underclasses, but it did found a market amongst those travellinmg to Frontier worlds or unexplored locations. The Dervish offers a combination of reliability and power that is appealing to those who do not have a steady supply of bullets.[10]

It is only known that it is a rare pattern of laspistol.[15]

A pattern of Laspistol manufactured by House Mons of Alecto. They have been in production for over a thousand years and range from antique relics to cheap variants like the model .402 which can easily be purchased from Alecto's less reputable stores.[18]

An Archeotech Laspistol, also known as a Lasrod or Gelt Gun, is an ancient design of Laspistol with much greater range and power, and is also more efficient with more shots per charge than most las weapons. It can be fired like a standard pistol, but many are equipped with folding stocks and longer barrels so they can be fired two handed for more accuracy. They are extremely rare and very few people other than Rogue Traders or collectors knew they exist. In the Koronus Expanse they are regarded as statements of rank or status.[9b]