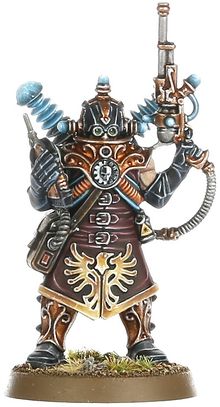 Lectro-Maesters are a type of Artisan Tech-Priest of the Adeptus Mechanicus.

The Lectro-Maesters have a powerful and innate connection with the Motive Force, allowing them to fully understand and wield energy. They are often charged with claiming the energies of unexplorted territories, and the Electro-Priests of the Mechanicus have come to view them as prophets of the Omnissiah as a result.[1]

Lectro-Maesters wield an array of technological marvels, such as a generator backpack which generates a powerful voltagheist field which sends out wraiths of energy whenever the wearer is threatened. These bursts of electricity can also act as a shield, prematurely detonating incoming munitions and dissipate energy projectiles. They are also equipped with a Voltaic Blaster. Their only weakness is their curiosity, for they often accompany Rogue Traders and Explorator Fleets in dangerous expeditions to unknown areas in search of new forms of energy.[1]