Legends of the Space Marines (Anthology) 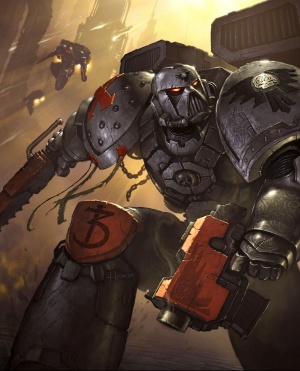 Legend of the Space Marines is an Anthology of short stories concerning primarily Loyalist Space Marine Chapters and first published in 2010.

At Mercy Rock, rebels are pushing back Imperial forces. The Salamanders intervene, but Librarian Pyriel must face a grave test as Hell Night approaches and ghosts walk the world.

Infiltrating a Chaos-tainted fortress under the cover of darkness, White Scars Sergeant Kergis and his squad seek to avenge a grievous slight to their Chapter’s honour.

On the war-torn world of Armageddon, the Black Templars must find a relic buried in the ice of the Dead Lands if they are to survive an overwhelming attack by the greenskins.

A serf of the Space Wolves tells a tale in a banquet hall of The Fang of two Space Wolves, Daegalan and Hrothgar who are out on the slopes of Fenris whilst the forces of Cardinal Bucharis besiege the Fang.

The Doom Eagles' homeworld of Gathis II is rocked by an unexpected event. Veteran Sergeant Tarikus has been rescued, after he was thought dead when the medical frigate he was recovering on was attacked by the Red Corsairs.

The 4th Company of the Ultramarines returns from Tarsis Ultra after their narrow victory over the Tyranids. Shortly after their arrival, Captain Uriel Ventris and Sergeant Pasanius Lysane are both placed under arrest and charged with breaking from the Codex Astartes, a crime punishable by execution.

A man and his son are hiding in a bunker underneath their home, sheltering from a conflict above. They leave to explore their surroundings, finding devastation and eventually a Space Marine, wounded, with destroyed power armour and trapped underneath a rock fall. This Astartes explains that his chapter was on their world fighting a Chaos Warband called the Punishers, who had hoped to take this world in order to forge a bridgehead and go on to conquer the rest of the sector.

The Trial of the Mantis Warriors

Main article: The Trial of the Mantis Warriors (Short Story)

Chapter Master Neotera recounts the events that led his Chapter into heresy in the Badab War as the Mantis Warriors are put on trial for their very existence.

Orphans of the Kraken

Scythes of the Emperor Space Marines infiltrate a tyranid bioship seeking the gene-seed of fallen brothers to rebuild their shattered Chapter. But something lurks in the shadows...

Brother Zavien of the Flesh Tearers embarks on a hunt in the jungles of Armageddon. His quarry is the deadliest of all foes: his own battle brother, Jarl.