The Legio Astorum (also known as the Warp Runners) is a Titan Legion based on the Forgeworld Lucius in the Segmentum Obscurus.[8] They are known to have been active since at least the Great Crusade and fought on the Loyalist side during the Horus Heresy.[Needs Citation]

The Legio Astorum are the only Legio with god-machines that can be teleported straight into battle. This is a point of pride of Lucians and the matter of envy of other Legio.[8] 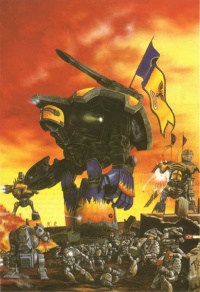 Where many Titan Legions are content to commit to a slow and steady advance, safe in the knowledge no foe can stand against them, the Legio Astorum sets its own tempo upon the battlefield. Through careful locomotor modification combined with extensive training amongst its Princeps, the Titans of Legio Astorum are pushed beyond all advised limits, the innate stubbornness of its Princeps seeing the protesting machine spirit as another challenge to overcome, albeit a challenge to be treated with all due reverence. It is upon the cusp of self-destruction that Legio Astorum thrives, its Titans granted a swiftness that few other Legios can match. In this manner has Legio Astorum earned itself a fearsome, and often mythological, status amongst both the ranks of the Great Crusade and the worlds the Titan Legion has aided in conquest.[14]

When Mars and Lucius reconnected, the Legio Astorum was moved for the forefunt of the Great Crusade, where the Legion's preference for swift spearhead assaults saw it become a valued part of many Expeditionary Fleets. Unlike many other Legion's on the Great Crusade, the Legio Astorum had no qualms towards forming dozens of smaller battlegroups, retaining only a single demi-Legio of 50 Titans on Lucius at all times. On Crusade, the Legion thrived alongside those commanders that favored the free-thinking. As such, they became firm allies of Jaghatai Khan and Magnus the Red.[14]

During the middle years of the Great Crusade, forces of the Legio Astorum fought on Kamenka Troika alongside with forces from the Thousand Sons Legiones Astartes and the PanPac Eugenians of the Imperial Army against a huge force of Orks. This task was issued by the Emperor himself, and proved a difficult one for all involved. The campaign took two years to complete and caused significant Imperial casualties, including almost an entire Fellowship of the Thousand Sons and the entirety of the Legio Astorum detatchment.[1a]

In the aftermath of the campaign, the Thousand Sons decided to honour the Legio Astorum by recovering the wreck of the last Astorum Titan to fall, Canis Vertex, repairing and transporting her to Prospero to mount upon the pyramid of the Pyrae Cult. Canis Vertex would walk once more around a century later, during the Burning of Prospero.[1b]

The Legion is known to have fought in various engagements during the Horus Heresy, including the famed Battle of Tallarn as well as the Scouring of the Ollanz Cluster and Battle of Beta-Garmon.[Needs Citation]

They are also recorded as having destroyed a combined battleforce of Emperor's Children traitor marines and Titans of the rebel Tiger Eyes Legio at some point during the Heresy.[2]

During the 13th Black Crusade the Warp Runners supplied forces in the defense of Cadia. They fought alongside the Howling Griffons and the Drookian Fen Guard on Amistel Majoris against Plague Marines of the Death Guard. The fighting devolved into brutal trench warfare.[3]

On the factory world Demios Primary the Legio Astorum are known to have combated elements of the Black Legion and the Extinction Angels.[Needs Citation]

Other campaigns and battles

The Legio's symbol is the black sun of Lucius, representing the artificial sun at the heart of the hollow world as well as its isolation during the Age of Strife.[11]

Whilst the Warp Runners have consistently been depicted as having a deep blue livery with yellow heads, the original Adeptus Titanicus-era minatures combined this with bold flame-patterns which have been absent from most (though not all) of the more modern Forge World models.