The Legio's motto is Inveniam viam aut faciam which translates as I will either find a way or I shall make one.[1e]

The Imperator Titan Magnificum Incendius of the Legio Ignatum on Terra

The Legio Ignatum were one of the Triad Ferrum Morgulus, the three original Titan Legions that were founded during the Age of Strife.[3] During this time, they defended smaller Forge-Fanes from the beasts that roamed Mars gained a reputation for absolute loyalty for those they were charged to protect, differentiating them from the destruction-obsessed Legio Mortis and Legio Tempestus. Only unleashing their anger in true battle, Princeps of the Legio Mortis mistook their forbearance for weakness and sought to dominate them by force, only to be met with defiant fury. Because of the Ignatum, the Mortis failed to fully conquer Mars during the anarchy of the Age of Strife. From this name came their title Fire Wasps - named for the ancient predator of Terra which would be roused into a vicious frenzy if their nests were disturbed.[15]

With the coming of the Emperor, the Legio Ignatum became the protectors of the new Mechanicum while the Mortis became their destroyers and the Tempestus their crusaders. For most of the Great Crusade, they fought only in the defense of worlds reclaimed by the Mechanicum such as dealing with rebellions or Xenos invasions. One of their most famous battles during the Crusade was the defense of Ultrecht Magni from Orks during the Ullanor Crusade. Though the Fire Wasps were defeated by the Orks after four long days of fighting, their stubborn defense to buy time for an evacuation of the doomed world earned them much fame.

The Fire Wasps later fought in the Horus Heresy, at the start of which they had some 200 Titans (the most numerous of which were Warlords). It suffered heavy casualties in the opening moves of the Schism of Mars, as the traitorous Fabricator-General Kelbor-Hal sought to remove the one true threat to his power on the Red Planet.[15] Essentially broken into detachments charged with exacting revenge against the Dark Mechanicum and defending the Imperium, the Fire Wasps also fought on Paramar V, the Cataclysm of Iron, the War Within the Webway, and in the system of Tallarn, whose inhabitants courageously fought to resist the Renegade Legions.[13] During the Heresy, the Ignatum's loyalty was nearly their undoing due to their grievous losses.[15]

The Ignatum would go on to serve in the Siege of Terra, deploying it’s full Legio strength at the battle of the Mercury exultant killzone. [16a] During the battle on Terra, the Legio was led by Princeps Maximus Cydon aboard the Warmonger Class Titan Imperious Prima.[4] In the battle for the Mercury-Exultant Killzone, the Legio Ignatum along with an array of other Loyalist Legios and Knight Houses entered into an apocalyptic battle against the Legio Mortis led by the Dies Irae.[16a] Though inflicting heavy losses upon the enemy, the Legio Ignatum defensive lines were eventually breached by Legio Mortis and their Princeps Maximus Cydon was killed in battle when the Imperious Prima was destroyed.[16b]

After the lifting of the siege of the Palace, the Legio took part in the campaigns to track down and punish the heretics.. Also during the Heresy,

Throughout the long and bloody campaigns, the Fire Wasps kept their fierce hatred of the Legio Mortis, their old rivals turned to Chaos. This infamous Traitor Legion battered the walls of the Imperial Palace, and terrorised and systematically exterminated the populations of dozens of hive cities on Paramar and Tallarn. The hatred for the traitor Legio burns in the hearts of the members of the Legio Ignatum and one day old debts must be repaid.[Needs Citation] 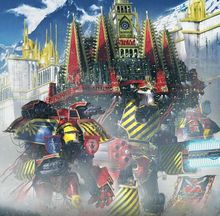 Legio Ignatum Titans on Terra during the Horus Heresy[17]

War of the Beast

The two Warhound Titans of the Legio Ignatum which guard the Eternity Gate in the Imperial Palace saw action against an attempted Eldar infiltration of the palace during the War of the Beast.[8]

A small group of Legio Ignatum titans were assigned to defend the fortress of Hydra Cordatus including the Warlord class Battle titans Imperator Bellum [1d], Honoris Causa [1g], the Reaver class Battle titans Clavis Regni [1a], Armis Juvat [1f], Pax Imperator [1f] and the Warhound class Scout titans Jure Divenu [1b] and Defensor Fidei [1c]. When the fortress was attacked by the Iron Warriors, the defending Legio Ignatum titans took on the despised Dies Irae which led a group of Legio Mortis traitor titans. Most of the defending titans were destroyed primarily by the heavy firepower of the Dies Irae however after several attempts the Legio Ignatum titans were finally able to destroy the Dies Irae.[1h]

During the Taros Campaign 4 Warhounds of the Legio Ignatum took part in battles on Taros.[9a]

In the Third War for Armageddon, the entire Legio was deployed to defend Armageddon.[11][12]

A number of Legio Ignatum battle Titans were stationed in the wastelands around Volcanus Hive, led by the Princeps of the Warmonger Battle Titan Imperious Prima, Milar Boitanus. During these actions, they fought alongside the Space Marines of the Iron Champions and Celestial Lions Chapters.[11]

At some point, Despot Gazgrim diverted his ork hordes from attacking Volcanus to take the fight to the Legio directly. Boitanus, influenced by the bellicose machine-spirit of Imperious Prima, was baited into responding to the threat too aggressively. Gazgrim was able to weaken the void shields of Ignatum's Titans with waves of Fighta-Bommerz, which provided cover for Gazgrim's Gargants to advance and engage Ignatum's forces. The two forces fought a hard-pitched battle for the next six hours before Princeps Boitanus was forced to order a retreat. Boitanus himself covered the retreat, resulting in his death and the destruction of Imperious Prima and several other Titans who refused to let the ancient war machine fall alone.[11]

In the aftermath, the Legio Ignatum was reduced to a quarter of their forces still active and faced with the shame of not just the death of such a hallowed Titan, but the knowledge that they had failed to liberate Volcanus. Ignatum was redeployed to support other Titan Legions active to the southeast of Volcanus on the Plains of Anthrand - specifically the Legio Tempestor and Legio Victorum.[11]

Elsewhere on Armageddon, a number of Titans from the Legios Ignatum, Invigilata and Metalica fought along the Hemlock river in Armageddon Secundus, supported by Space Marines from the Salamanders Chapter.[10a][10b]

In the Thirteenth Black Crusade the Legio worked alongside the Jouran Dragoons and Space Marines of the Death Spectres chapter.[Needs Citation]

In battle, the Legio Ignatum will deploy a phalanx of heavy Battle Titans straight away rather than the usual strategy of an initial screen of lighter Scouts.[15]

A long-standing belief among the Legio Ignatum stated that the fate of a battle was foretold by the first shot fired. If that shot struck a telling blow it would bring them victory, while a miss signalled a hard trial to come, and as such only the finest of marksmen would be allowed to make such a strike in the opening moments of battle.[15]