The Legio Metalica (also known as the Iron Skulls[4]) is a Titan Legion with a glorious legacy dating back to before the founding of the Imperium. During the Horus Heresy, at least part of the Legion turned to Chaos.[8]

The Legion's Homeworld of Metalica[4] lies in one of the most dangerous parts of the galaxy, an area infested with Orks and constantly threatened by war. The Iron Skulls were veterans of centuries of warfare even before the Great Crusade and re-unification with Terra. To date the Legio Metalica's tally of victories is unsurpassed by any other Titan Legion.[1]

The Loyalists of Metalica clashed with 3 Traitor Titan Legion's in the Ruin of Maedran.[10]

The Legio was stationed on Armageddon during the Second War for Armageddon. It was commanded by Princeps Prime Kurtiz Mannheim and based at Hive Tartarus.[Needs Citation]

Under the orders of Herman von Strab, he marched his Titans into the biggest Ork formation he could find. His legion was quickly cut down by the huge numbers of Gargants employed by the Orks. Mannheim's own Titan, Steel Hammer, managed to destroy three gargants before its main reactor was damaged. Mannheim marched his titan into the centre of the Ork horde and allowed his reactor to overload. The legion was all but annihilated that day, though Mannheim's final sacrifice wiped out thousands of the attacking Orks.[Needs Citation]

During the Third War for Armageddon, the Legio fought with Commissar Yarrick to destroy Ork Rok drop sites along with Legio Ignatum, Cadian Shock Troopers and various Space Marine chapters, along the Hemlock River.[Needs Citation]

Sometime before the Battle of Cruciatus Primus, a number of the Iron Skulls joined with the forces of Chaos, giving themselves to the Chaos God Khorne. They then attempted to corrupt the Legio Pallidus Mor, believing them susceptible to corruption, though the attempt failed. Records of this section of the Iron Skulls were then struck from all Imperial Records, though the Pallidus Mor never forgot the event, nor the insult.[8]

The Doom of Katara

After a successful Khornite Chaos Cultist uprising in the island hive city of Creontiades, on the forgeworld Katara, several Chaos corrupted engines of the Iron Skulls were deployed to reinforce the cultists in preparation to march on the other two hive cities: Deicoon and Therimachus. The legion's forces included several Banelord, Ravager, and Feral class Chaos Titans. At least some of the Banelord's had assimilated their crew into themselves. [8]

The Imperium responded by deploying a combined force of the Legio Solaria (Imperial Hunters) and demi-Legio Pallidus Mor. The Imperial forces split between the two remaining hive cities, with the Imperial Hunters defending Therimachus, and the Pallidus Mor (reinforced by Reavers and Warhounds of the Imperial Hunters) defending Deicoon. The Iron Skulls first engaged the Imperial Titans on a massive bridge over the Kazani Strait, between Creontiades and the mainland. The Iron Skulls began to overwhelm their opponents and push them back across the bridge. In response, the Imperial Titans fired upon the bridge and destroyed it, knocking several of the Iron Skull's Titans into the sea below, and stranding the the rest of the Iron Skulls on the island. The next day, the cultists performed a ritual which summoned a brass bridge to allow their forces to cross the sea.[8]

The Iron Skulls then marched upon Deicoon, where another cultist uprising had begun within the city. The Imperium's Titans had been docked within the city for rearmament and repairs. The cultists within the city managed to capture the Imperial Titan's crew members, intending to corrupt them and add their engines to their forces. Most of the Iron Skulls then bypassed the city and marched upon Therimachus, though a few remained at Deicoon. The detachment sent to Therimachus engaged the main force of the Imperial Hunters. Despite fierce fighting and suffering losses, the Iron Skulls overwhelmed and destroyed the entire Imperial Titan force, with one Banelord personally ripping the head off of the Imperial Hunter's lead Warlord Titan Augustus Secutor.[8]

The Iron Skulls were then ambushed in Deicoon, as the Pallidus Mor and remainder of the Imperial Hunters had escaped uncorrupted and returned to their Titans. The Iron Skulls at Deicoon were eradicated. The remaining Iron Skulls at Therimacus attempted to defend the Hive city as the Imperial forces approached and began destroying the city to prevent another ritual from being completed. The Imperials managed to successfully level the city, though their lead Titan, the Warlord-class Gloria Vastator, was destroyed (though the crew managed to eject). The fierce fighting reduced the Iron Skulls' forces down to a single Banelord.[8]

The final engagement occurred when the Imperial deployed a final Warlord Titan, the Ferrum Salvator, that had been in storage in orbit above the planet (it had been heavily damaged in a battle prior to deployment to Katara). The Iron Skulls' Banelord recognized the Imperial's plan to reactivate the Warlord and attempted to engage it before it could join the fight. It was held back long enough for the Imperial Warlord to activate just before contact. Engaging at point-blank range, the Banelord used its Doom Fist to crush the Imperial's Volcano Cannon, but the Imperial Titan impaled the Iron Skull with a Quake Cannon and fired. This destroyed the Banelord and the last of the Iron Skulls on the planet.[8] 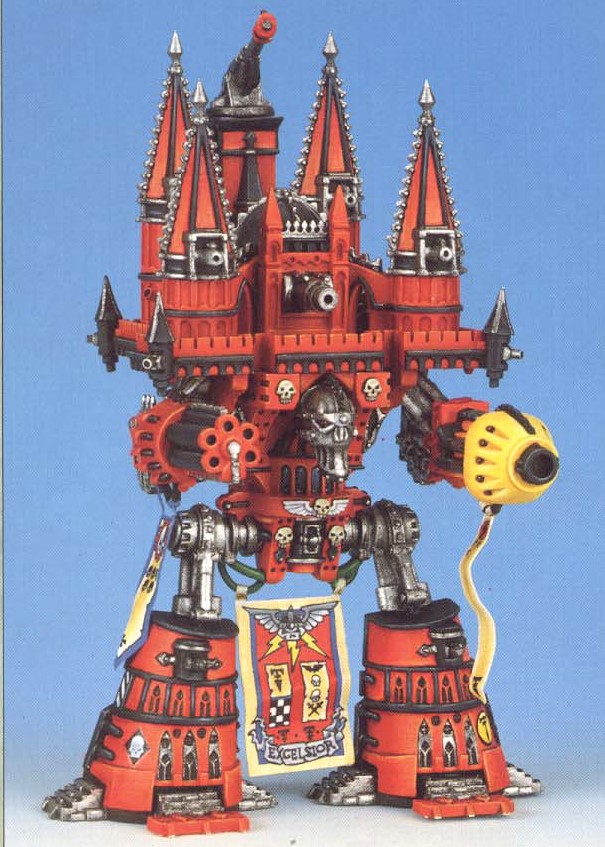 An Imperator Titan of the Legio Metalica[1]