Legio Mortis (AKA the Death's Heads) are a Traitor Titan Legion currently residing within the Eye of Terror.

The Legio Mortis was formed during the Age of Strife, before the founding of the Imperium itself. According to legends of the Martian Lexmechanics, they were one of the Triad Ferrum Morgulus, the three original Titan Legions created by the besieged Cult Mechanicum during the bloody wars to take the Red Planet from hordes of Cy-Carnivora and Mutants. Legend holds that their original purpose was to serve as the personal guardians of the Fabricator-General's domain and the annihilation of any who would threaten the cult of the Omnissiah. Before the union between the Mechanicum and the Imperium, the Legio Mortis was frequently employed as the Praetorian Guard of the Fabricator-General, punishing any who would dare challenge the authority of the Priesthood, including other Titan Legions. Their status garnered rivalry from other Legions, most notably the Legio Ignatum and Legio Venator.[1a]

Even after joining with the Imperium, the Legio Mortis was looked upon with suspicion by the fledgling Imperial military staff, many accusing them of being solely loyal to the Fabricator-General as opposed to the Emperor. To both demonstrate and deepen their loyalty to the Imperium,[Needs Citation] the Legio Mortis was assigned to Horus Lupercal and the 63rd Expeditionary Fleet during the last years of the Great Crusade - for example they fought in the War on Murder.[11] With the charismatic Primarch they fought over a hundred campaigns, scoring victory after victory. However rather then becoming loyal to the Emperor or his Imperium, the Legio Mortis instead developed a fierce allegiance to Horus himself. Thus it was that they willingly followed their Warmaster into treachery.[1a] 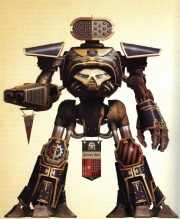 By the time of the Horus Heresy, the Legio Mortis possessed around 200 Titans, 2 support armor battalions, five Skitarii Legions, and 9 air support squadrons. It is said only the Legio Destructor possessed more Titans than the Legio Mortis, and they possessed the greatest number of Emperor Titans.[13] The legion was corrupted by the powers of Chaos which enveloped the rebel forces under Horus, and most of the Death's Heads fell towards the vile decay of Nurgle, ironically that same entity which had so disgusted the Titan crews fighting against the hordes of Plague Bearers on the moon of Davin before Horus fell. The Legio Mortis became the most notorious of the traitor Titan Legions. The Legio directly supported Horus before his daemon-possessed treachery against the Emperor. The Legio followed him willingly. When the Horus Heresy began with the virus-bombing of Isstvan III, it was the Legio Mortis which made the landings to scour the corpse-packed hives for the last survivors.[Needs Citation] Later during the Fall of Prospero a Legio Mortis contingent was dispatched as part of the Space Wolves-led force. However the Legio Mortis force was near-annihilated during the battle, saved only by the Ordo Sinister. The humiliation caused their involvement to largely be covered up.[9]

During the Schism of Mars, the Legio Mortis forces supported the traitor Fabricator General Kelbor-Hal, and were the first titan legion to walk in support of Horus. These contingents of Legio Mortis, however, were all but destroyed by Legio Tempestus, save for the Hellstorm Cannon of the Imperator Aquila Ignis.[Needs Citation]

Over the course of the Heresy, the Death's Heads also fought on Iydris[8a], Maedran, Paramar V, and Tallarn]. They were the tip of the spear of Horus' final attack during the climax of the Battle of Beta-Garmon, engaging in a surprise attack upon Beta-Garmon III with the Sons of Horus.[10] 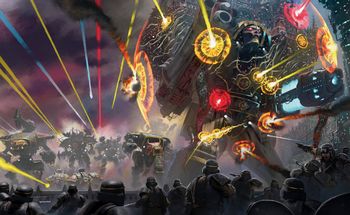 Some say that it was mutated strains of the Life-Eater Virus that was unleashed upon Isstvan III that brought about the final corruption of the Legio. When the Legio Mortis landed on Earth to besiege the Emperor's palace they were warped and mutated almost beyond recognition. The adamantium skins of their Titans were pocked and bubbled with foul effluvia, great tentacles of flesh and metal lashed and their titan heads had been transformed into the visages of daemons. The Legion breached the walls of the Imperial Palace during the siege.[Needs Citation]

The remnants of the Legion fled to the Eye of Terror following the collapse of the rebellion, and from time to time, Chaos Titans bearing the tattered banners of the Legio Mortis have attacked human planets to wreak terrible vengeance on all living things for the defeat of their beloved Warmaster.[Needs Citation]

By M41/M42, Legio Mortis was still one of the most active Traitor Titan Legions. It fought in First War for Armageddon,[16] the Siege of Hydra Cordatus,[17a] the 13th Black Crusade of Abaddon the Despoiler,[7] the Battle of the Agripinaa System,[15] the War of Beasts on Vigilus,[7] and the Nachmund Rift War.[14]