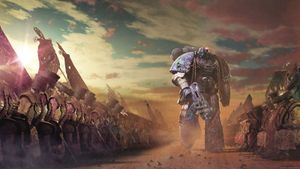 Legion is a novel by Dan Abnett and the seventh book in the Horus Heresy Series.

Published in March, 2008, Legion features a purple spine-band, the first novel in the series to do so. It is set two years before the beginning of the Horus Heresy and focuses on the Alpha Legion Adeptus Astartes as well as some elements of the Imperial Army and a Xenos group known as the Cabal. It was later included in "The Novels: Volume 2" eBook collection.

A Great War is coming, and it will engulf the Imperium of Man. The Space Marines of the Alpha Legion, the last and most secretive of all the Legiones Astartes brotherhoods, arrive on a heathen world to support the Imperial Army in a pacification campaign against strange and uncanny forces. But what drives the Alpha Legion? Can they be trusted, and what side will they choose when the Great War begins? Loyalties are put to the test, and the cunning schemes of an alien intelligence revealed.

The Compliance Action on the world of Nurth is not going smoothly. Despite the leadership of the particularly prestigious and accomplished Lord Commander Teng Namatjira and the presence of ancient and elite Imperial Army regiments, the native inhabitants seem to be holding off the Imperial forces with relative ease.

Tired and stung by this turn of events, Adeptus Astartes reinforcement is requested, and granted. Astartes of the Alpha Legion, led by their Primarch, are tasked to the theatre. The Nurthene rebellion is doomed as a result, the majority of their armed forces bottled up in an enormous siege.

It becomes evident that the Alpha Legion do not operate as other Astartes Legions; they make great use of subterfuge, so much so that the Lord Commander was not aware of their presence and contribution to the campaign until they announced themselves. Subterfuge proves to be the order of the day in the Nurthene campaign, as it is discovered that a Xenos-augmented Human spy is loose in the theatre, attempting to orchestrate the complex plans of his masters...plans that included the manipulation of events that resulted in the Alpha Legion arriving on Nurth.

This spy, John Grammaticus, works for an organisation he knows as the Cabal, a group of Xenos species. This Cabal is dedicated to the excision of the Primordial Annihilator, Chaos. Aware of the coming Heresy, they believe that the Alpha Legion represent the last chance to save the galaxy from the predations of the Chaos powers. To this end, they confer with the Primarch of the Legion, Alpharius Omegon, and sway him/them to their viewpoint. In order for Chaos to perish, Horus must win the Heresy. In order for that to happen, the Alpha Legion must side with him.