Legion of the Damned

The Legion of the Damned are a legendary and mysterious force of Adeptus Astartes. Pale and gaunt Space Marines plated in black power armour adorned with death imagery, they unexpectedly appear from nowhere to help Imperial forces in times of great need. The truth behind their origin is currently unknown for certain, but Inquisitorial investigations have drawn a link between them and the lost Fire Hawks Chapter.[2] 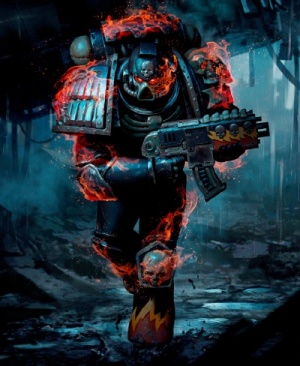 The Legion are afflicted by a warp contagion that destroys their sanity; as it progresses their bodies decay, but they grow in supernatural strength. Each Marine is rapidly approaching the moment when he will succumb to the contagion. Combat can initiate the final stages of the disease, in which the Marine reaches a peak in power and enters a berserker state.[1a]

A few scholars of Adeptus Astartes have proposed that the Legion of the Damned is a psychic backlash made real. Events such as the Drop Site Massacre or the death of a Primarch were so traumatic they left a permanent scar on the psyches of all of the First Founding Legions, so these theories run, a scar so deep it has permeated not only the Chapters that came after them but hundreds of successor Chapters since that tumultuous time. The Space Marines that have remained loyal to the Emperor since then have a deep-seated belief that those who betrayed them should be made to pay for their transgressions with fire and fury. It is quite possible that the Librarians of the Adeptus Astartes tap into this belief and make it real, whether by accident or design, resurrecting the ghosts of their fallen brothers and giving them a chance to wreak their terrible revenge. These scholars believe it is a Chapter’s burning conviction that the guilty must be punished that gives the phantoms of the Legion a physical form.[4a]

There are radicals amongst the Librarius who have a similar theory, though they believe the Legion of the Damned is a kind of consensual hallucination, and occasionally even manifestation, conjured by Mankind as a whole. They believe that the subconscious power of hope is so strong, that when combined with the nascent psychic abilities that lurk within Humanity’s minds and a stimulus of imminent death, it can potentially be made reality. Central to this theory is the idea that though a single man may have but the tiniest shred of spiritual or mystical ability, the uncounted trillions of humans that populate the Imperium all contribute to a kind of psychic reservoir that can be tapped into in extremis, even by those who do not realise they are doing so. The Adeptus Astartes have come to embody both hope and terror to a beleaguered Imperium, and the form of deliverance and vengeance alike is the broad silhouette of the Space Marine.[4a]

Another belief whispered amongst the hidden orders of the Adeptus Astartes is that the Legion of the Damned were once a Chapter of Space Marines, a force that has been claimed by the fires of the Warp and reborn into a more sinister form. After all, across the Imperium’s long history, several contingents of Space Marines have made translation into the Empyrean and emerged changed as a result, or not emerged at all. Prominent amongst these are the Fire Hawks, a Chapter whose history was blighted by disaster.[4a] 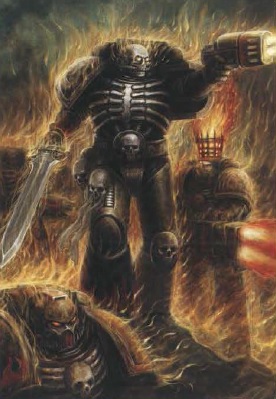 Legion of the Damned[13]

From the data contained in the recorder the Administratum was able to determine exactly what had happened to the lost chapter. Following their warp-jump the entire fleet had been caught within a warp-storm of terrific intensity and forced to endure the attacks of powerful warp entities. Ship after ship was destroyed. Soon only one craft remained. By a daring warp-exit manoeuvre the craft burst out of warp-space, emerging far in the galactic east, thousands of light years off-course and beyond even the psychic light of the Emperor.[1a]

The original survivors numbered two hundred brethren. All gene-seed had been lost, all initiates killed, and most of the chapter's masters were gone. None of the ordinary human staff have survived at all. To make matters worse the brethren had changed. This change became more obvious over the next few months. Skins began to blacken and blister, flesh began to fester and putrefy. Slowly they began to die. Within days of the transition into normal space it became obvious that the chapter had been exposed to some form of dangerous mutation or disease. It took many years to navigate a way back into the Imperium, during which time almost half the brethren succumbed to the malady. Those who remained were no longer sane. Pain and despair had driven even their hardened minds beyond the point of rationality. Doomed to agonising deaths, they gradually became obsessed with their fate. Now they only wanted to die. But they were still marines, still loyal to the Emperor and humanity. They would not die without a purpose.[1a]

So began the unstoppable war of the Legion of the Damned! The marines elected to remove all insignia from their armour. Instead their armour would be black, decorated by each brother with whatever emblems of death he chose. Most brothers employed a similar theme - skeletons, bones and skulls.[1a]

All ranks and companies were abolished, most of the chapter's officers were already dead and the remaining warriors were too few to make up a fully functioning chapter hierarchy. All brothers were to be equal before death - leveled by the certainty of their assured extinction. The warriors decided to expend their lives attacking enemies wherever they could be found. The disease had robbed them of their sanity, but not their loyalty![1a]

In the year 963.M41 the Fire Hawks were sent to the Crows World subsector against Eldar pirates. The entire chapter-fleet, including the chapter's mobile space-fortress Raptorus Rex[1a], made a successful warp jump from the Piraeus system 120 light years to Crows World. The five ships, over eight hundred brethren, and two thousand other personnel expected to reach Crows World within no more than 12 hours. They never arrived.[1a]

Twenty years after the event the chapter was officially declared lost in the warp and presumed destroyed. The great Bell of Lost Souls tolled a thousand times, and it said that the Emperor himself ordered a Black Candle to be lit in the Adeptus Chapel of Fallen Heroes.[1a]

On 986.M41 a routine Imperial patrol passed through the Ork-held system of Jakor-tal. The squadron uncovered altogether unexpected scenes of devastation. The limited facilities available to the patrol could uncover no clue to the identity of the attacking forces. The incident was noted and passed into the records of the Administratum.[1a]

A rash of similar incidents within the same and adjoining sectors aroused the interest of the Inquisition but no sign of the intruders was discovered for almost a year. Then, a patrol ship in the Maran sub-sector narrowly avoided a collision with a space-craft at the Cift jump-point. The patrol ship was entering the Cift system as the unidentified craft was leaving. Alerted by the close encounter, the patrol crew scanned the entire jump-area and discovered two long cylindrical objects within the intruder's projected flight-path. These were hauled aboard and proved to be standard space-coffins without identification markings.[1a]

The coffins were shipped back to earth and opened by the Adeptus Mechanicus. The coffins themselves were identified as belonging to the Absolute, one of the spacecraft from the vanished Fire Hawk fleet. Inside were the armoured remains of two Space Marines. The unconventional armour colours and unofficial insignia puzzled the investigators, but serial numbers tallied with equipment made by or issued to the Fire Hawks. The armoured suits were expected to house members of the lost chapter, and were carefully broken open. The bodies within were human, but further identification proved impossible due to their advanced state of decay.[1a]

Almost a year later a besieged Imperial research station received unexpected help. The garrison had been attacked by Ork pirates. After three hours of fighting the situation looked hopeless. Then, without warning, the Orks found themselves attacked from the rear. Within half an hour, several hundred Orks had fallen to the mysterious, power armoured figures. Then, as suddenly as they had appeared, the warriors vanished. This time they left behind a banner - the gnarled chapter flag of the Fire Hawks - and inscribed upon it was the motto In dedicato imperatum ultra articulo mortis (For the Emperor beyond the point of death). As well as the banner there was a recorder and sundry other sealed items. These were shipped to Terra.[1a]

The next known contact with the Chapter was on the cemetery world Certus-Minor where they showed up just before the Cholerclaust Blood Crusade attained ultimate victory, swiftly annihilating the entirety of the crusade, leaving no enemy survivors. A system defense ship in orbit reports that shortly before the unexpected reinforcement of the all but destroyed defenders, a vessel resembling the Star Fort Raptorus Rex appeared in system and began systematically obliterating the Chaos armada.[1a]

The Legion has even appeared in the astral docks of Luna, freeing a Salamanders kill team from the vacuum traps of the renegade Draco Clan. This act allowed the Space Marines to intercept a transfer shuttle that had been wired to detonate upon landing within the Great Terran Autoarchive. If the Autoarchive had been lost, the Adeptus Administratum would have suffered a blow that would have compromised their logic engines across the galaxy, and possibly even prevented the Imperium from coordinating its military actions for the best part of a century.[Needs Citation]

The Legion has no formal organisation - it fights as a single body of troops. The only tactic possible to such a formation is to steam-roll over the enemy by a steady advance.[1a]

The Legion is not a part of any Imperial force, and employs an unusual modus operandi. Apart from driving them insane, the contagion heightens their psychic awareness considerably. One result of this is the way in which the legion selects and attacks targets. These matters are left entirely to the process of divination provided by the mystic Emperor's Tarot. This tarot is supposedly bound within the psychic will of the Emperor and is used throughout the Imperium as both a pastime and a form of divination. It is an undeniable fact that attacks seem to fall in 'the right place at the right time'.[1a]