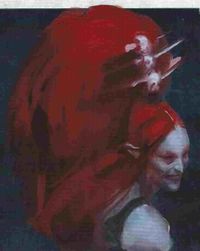 Lelith Hesperax, known as the Queen of Knives[5], is the Succubus of the Wych Cult of Strife[3].

Lelith Hesperax is best known for her abilities in the Dark Eldar coliseums and is considered the undisputed master of the gladiatorial arenas.[2] Instances have been recorded of her fighting up to ten opponents simultaneously without receiving a scratch. Her preferred combat dress is to expose as much bare skin as she can and to wear her floor-length hair loose in order to taunt her opponents into attacking, a fact that draws significant attention from spectators.

Away from the coliseums of Commorragh and on the battlefields of the 41st millennium she is unmatched in hand to hand combat and her speed and skill make her a truly deadly opponent. Unique amongst most of her kind, Lelith does not use any kind of enhancement drugs for combat. She prefers to fight up close and considers narcotics a sign of weakness. This mindset is usually suicidal for Dark Eldar, and says much about her battle prowess that she remains nearly scarless. Many in Commoragh insist her power comes from a dark source.[5] She is fond of testing herself and putting on grand spectacles, as demonstrated when she turned an entire Imperial city into a slaughter-arena filled with traps during the Battle of Martyr's Rest.[9]

After defeating Yvraine in the arena, Lelith has gone on to join forces with the reborn prophet of Ynnead, committing much of the Cult of Strife to the Ynnari effort. While many think she simply wishes to erase Slaanesh with the rest of her kin, in truth she seeks to locate and capture Lucius the Eternal. Lelith believes that if she can strip Lucius of his daemonic armor and fight him in the arena, it would be the greatest duel Commorragh has ever seen.[5] Lelith Hesperax was one of Yvraine's defenders during the Battle of Iathglas.[6]

She is a master of all Wych Weapons, but is most commonly seen wielding an Impaler and Falchion[1] or a simple pair of wickedly sharp knives[2]. In addition to her conventional weapons, Lelith's hair is sewn through with barbs and hooks and her fingernails have been honed to scalpel sharpness.[2]