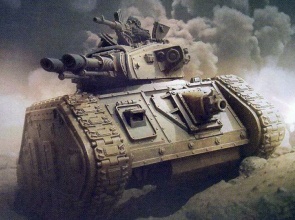 The Leman Russ Annihilator is an uncommon variant of the Leman Russ Battle Tank used by the Imperial Guard. Taking its name from the Space Marine Predator Annihilator, this dedicated Tank Hunter has been a mainstay of the Death Korps of Krieg and Tekarn Armoured regiments and is seeing increasing use by other regiments throughout the galaxy.[1][2]

Like its namesake, the Annihilator sports a set of turret-mounted twin-linked lascannons; these replace the primary weapon of a standard Leman Russ, the Battle Cannon. Space which had been given over to the Battle Cannon's ammunition is instead used to store extra power cells. While it is an able tank-hunter, used by most regiments as a defensive weapon, it is not as highly regarded as the Leman Russ Vanquisher. Where it does excel is the straightforward nature of its twin lascannons, easier to replace and maintain than the Vanquisher's main cannon, which make it highly favorable in warzones with high attrition rates and resupply problems.[1][2]

It is believed that the Leman Russ Annihilator have been developed within the past three to five millennia. It is not known exactly when the Tech-Priests of Mars officially sanctioned its production, although there are confirmed listings of it on various regiments’ Order of Battle from the M37 at least.[3]

The Annihilators are used essentially in war zones where tank attrition rates are high and resupply problematic. The mighty Forge Worlds of Mars, Ryza and Accatran have begun producing the Leman Russ Annihilators in increasing numbers to meet demands following battlefield losses. Also a number of other Forge Worlds across the galaxy lobbying for unrestricted access to the tank’s blueprints.[3]

As in the standard Leman Russ, the Annihilator is equipped with a hull-mounted Heavy Bolter, which can be replaced with a Heavy Flamer or lascannon, along with Smoke Launchers and a Searchlight. Sponson mounts can be fitted and armed with heavy bolters, heavy flamers, Multi-meltas or Plasma Cannons. Some tanks will be further modified with Camo Netting, a Dozer Blade, Extra Armour, a Hunter-Killer Missile and/or a pintle-mounted support weapon, either a Heavy Stubber or Storm Bolter.[2]

Some Forge Worlds add their own customizations to the design of the Annihilators which may vary. For example, the Mars Alpha pattern commonly mounts a heavy bolter.[3]

In recent decades armoured forces of Krieg have been a major recipient of this pattern Annihilators, its design adapted to cope with the hostile environments its armies commonly endure. The adaptations include, for example, trench rails for easy extraction should the tank become bogged down and additional filtration systems to protect against airborne pollutants.[3]

In the past few decades Mars Alpha pattern Annihilators allocated to the Kried armoured regiments have also started to appear off the production lines with vastly reinforced hulls. It is not known if this is a general adaptation of the variant pattern recently sanctioned by the Adeptus Mechanicus or a reaction to the Krieg regiments’ tendency to follow more aggressive battle strategies, which prefer their commanders sending the Annihilators charging towards the enemy lines rather than using a defensive tank hunter tactics of other armies.[3]