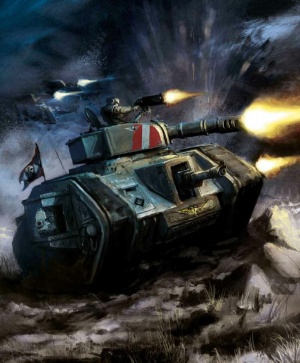 A Leman Russ engaged in battle.[2a]

The Leman Russ is the main Battle Tank of the Imperial Guard. This rugged and dependable tank has been used to equip the Guard for many centuries, and while fundamental changes in construction and appearance have occurred, its capabilities have changed very little. Able to operate in a variety of environments and withstand enemy fire while delivering powerful tank-killing blows.[1] It was named after Leman Russ, the Primarch of the Space Wolves.[10]

During the Great Crusade the STC of the Leman Russ Battle Tank was discovered on Nova Borilia. The world had been part of the Noman civilization, which had enslaved a portion of humanity for millennia. The Noman were crushed by the Space Wolves, who recovered the STC and named its fruit in the honor of their Primarch.[12]

Ever since, it has been the main battle tank of the Imperial Army (and later the Imperial Guard) and the mainstay of armoured regiments across the Imperium, the Leman Russ is produced in the millions on Forge Worlds and in Hive factories across the Imperium. While slow in comparison to other Guard vehicles and lacking in advanced technology, its ruggedness and reliability are the tank's defining attribute.[3a] Emphasizing heavy firepower and armour over mobility, it is rare for any Imperial Guard force to engage an enemy army without the support of Leman Russ tanks. The Leman Russ has been in service for millennia, a testament to its simple but efficient and easily producible design, making it arguably the most successful tank in the galaxy.[2a]

The main gun of the Leman Russ is its turret-mounted Battle Cannon, a 120mm smoothbore gun[4] which can equally decimate enemy infantry and tanks.[2a] A water-cooled jacket surrounds the cannon while gyrostabilisers ensure accurate targeting while on the move.[8] Aiming the weapon is done through a dedicated periscope with a 45° field of vision[4] with assistance from Targeter gear[4] such as laser-rangefinders.[5c] Auspex guidance such as landscape readers[5b] and crosswind indicators[5c] provide additional information to assist in locating and targeting the enemy. Secondary armament will generally consist of a Lascannon in the forward hull mount[1] with a 90° field of fire[4] though other options include a Heavy Bolter or Heavy Flamer.[2b] The side sponson mounts are an optional part of the tank's design, but when mounted they can be fitted with a variety of heavy weapons for close-in defense[1] including Heavy Bolters, Heavy Flamers, Multi-meltas or Plasma Cannons.[2b] These are manned by dedicated gunners and capable of a 90° field of fire to the front and sides of the vehicle.[4]

The Leman Russ' armour is not the most sophisticated but is practical and rugged, allowing it to weather the harshest environments or enemy fire.[1] Due to the tanks simple and functional design it requires minimal training for new crews to become familiar with the tank's operations.[3a] A reinforced cast plasteel hull and turret[3a] with ferro-steel armour plating combine to make it proof against all but the most deadly attacks.[2a] Even impacts powerful enough to lurch the tank several meters sideways will fail to penetrate through its tough hide, though such attacks can damage secondary systems such as the forward scopes and leave the crew stunned.[5a] This armour is thickest on the tank's front, with decreasing thickness along the sides and rear, to prevent the engine from overheating or over-straining of the transmission.[3a]

The sturdy, efficient engine which powers the Leman Russ can run on practically any type of fuel and keep the vehicle moving even in the most hellish conditions;[2a] secondary systems such as life support and electrics are powered by internal generators.[3a] While a slow vehicle the tank's track arrangement means it exerts a low amount of ground pressure which, combined with fine regenerative steering, allows it to perform almost balletic maneuvers.[5d] Hard-wound steel spring shock-absorbers provide added stability on the move.[4]

Other standard gear include Smoke Launchers and a Searchlight. Some Leman Russ tanks are further upgraded with Camo Netting, a Dozer Blade, Extra Armour, a Hunter-Killer Missile and/or a pintle-mounted Heavy Stubber/Storm Bolter.[2b]

A minimum of four crew are required to operate the Leman Russ, with two more needed to man the sponson weapons if mounted, though they must do so without comfort in a cramped, hot and noisy environment.[2a] The sponson gunners are the most junior members of the crew, responsible for manning the cramped sponson weapons and otherwise aiding the other members in any tasks. Above them is the loader, responsible for loading the main gun and, as needed, manning the hull-mounted weapon. Outside of combat his job will be to keep track of the tank's logistical needs and ensure it has been re-armed and refueled prior to battle. The driver is next in seniority, a highly technical job responsible for not only driving the tank but also overseeing basic maintenance of the tank's running gear. When stationary the driver can man the hull-mounted weapon, though this practice is discouraged by most since it leaves the tank immobile. The gunner is tasked with firing the tank's primary weapon, along with any co-axial weapons, and also functions as the tank's second-in-command. Between battles his responsibility is to clean and maintain the tank's weapons. The tank commander directs the other crewmembers and is responsible for maintaining an overall picture of the battle, keeping in contact with other tanks through external communication equipment, and manning any pintle-mounted weapons.[3b] 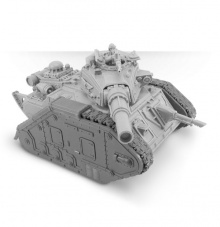 The Mars Alpha pattern whilst originating from Mars is produced on many Forge Worlds across the Imperium. There are many alterations to the standard pattern, main of which is the elongated hull giving more room to operate for the tank crew. These tanks are often used as a squadron command vehicle for armoured companies, with extra space given to sensor equipment and communication systems.[11]

The engine compartment is of an older pattern, seen more commonly on Destroyers and Thunderers, easily recognizable by its two horizontal exhausts. Position of the hull’s weapon is reconfigured to take a ball mounted lascannon or heavy bolter, with the additional small vision periscope above for the gunner.[11]

Both hulls of the Mars Alpha Pattern are constructed differently. Most Leman Russes are cast with plasteel, whilst this pattern is constructed from individual riveted plates. Though it doesn’t make any real help to resist heavy enemy fire, any additional data about this improvement is jealously guarded by the Adeptus Mechanicus.[11] 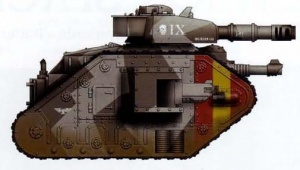 Picture of a Leman Russ

There are many variants of the traditional Mars Pattern Leman Russ, and this list is rather general. Most of the other designs replace the main turret with a different weapon, but sometimes the hull and sponson weapons are altered as well:

In addition, the following tanks use a standard Leman Russ chassis: