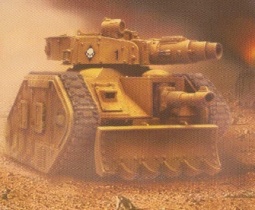 The Leman Russ Conqueror is a less common variant of the Leman Russ Battle Tank. It is armed with a Conqueror cannon, a shorter and lighter version of the Battle Cannon. This reduces the power and range of the weapon but allows it to move faster and fire more accurately, making it a very versatile variant.[1a]

The Conqueror was first created on Gryphonne IV when its plans were rediscovered sometime in the 38th millennium. Now the plans reside with Mars and several other Forge Worlds are trying to get an approved access. Originally, battlefield commanders voiced concerns that the smaller cannon would reduce the available firepower and result in poor battlefield performance. During field testing however it was shown that the reduced recoil of the gun made up for its reduced power with improved accuracy while firing on the move. The smaller shell size also allowed loaders to fire faster and carry more ammunition than the standard Leman Russ Battle Tank.[1a]

The entire first batch of Conquerors produced was assigned to the Gryphonne IV Skitarii forces for the Castra Campaign, where they operated alongside a battle group of the War Griffons Titans. During the campaign the Conquerors proved they could easily keep pace with the Titans as they encircled and trapped the besiegers of Hive Castra Septus, annihilating the traitors within the pocket[1a] and collapsing the hive in the process.[3a] Following this success production of the Conqueror increased and was exported to the Imperial Guard, where it has become popular among tank crews and unofficially known as a 'breakthrough' tank. Currently only Gryphonne IV produces the Conqueror in significant numbers, though the plans also reside with Mars where a Mars Alpha pattern is also produced, and a number of other Forge Worlds have petitioned for access to the blue-prints.[1a]

At some time during the 39th millennium, special munitions were created on Gryphonne IV by the munitions adepts, who were trying to increase the tank's firepower with the use of Augur shells. The warhead of such a shell consists of a soft explosive in a thin shell that is designed to break open on impact, spreading the explosive over the surface of the specific target during the microsecond before the base-mounted fuse detonates it. This is liable to kill or wound any occupants, and can disable instruments and controls, because of breaking off the interior layers of the target and ricochets around inside a vehicle. However after seeing the limited size of use on a battlefield, these type of shells was considered a failure by many and production of these shells is no longer permitted.[1a][3c]

With its quality torsion bar suspension system and high power-to-weight ratio the Conqueror is considered an excellent cavalry tank, able to outmaneuver and overwhelm the enemy with mobile firepower.[2c] As with other Leman Russ tanks the Conqueror is fitted with Targeter and Auspex gear including a laser rangefinder, landscape reader and crosswind sensor.[2c] The turret has been modified with additional armour plates riveted to the forward sides, along with improved air-intakes and venting, sealed against environmental hazards with valves and mufflers, allowing it to operate in harsh terrains. The turret also features a Searchlight and an armoured ammunition access hatch in the rear for faster re-arming and quicker disposal of spent shells without having to exit the vehicle.[1a]

Next to the Conqueror cannon in the turret is a co-axial Storm Bolter, removing the need for pintle-mounted weapons (although the tank can still be outfitted to carry one, either a second Storm Bolter or Heavy Stubber. A hull-mounted Heavy Bolter or Lascannon also come standard, while the option sponson mounts can be fitted with Heavy Bolters or Heavy Flamers. Other common additions include Camo Netting, Extra Armour, a Hunter-Killer Missile, Improved Comms, a Mine Sweeper, Rough Terrain Modification, Track Guards and/or Smoke Launchers.[1d]

Regiments known to include Conquerors 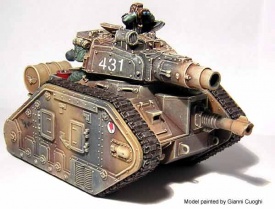